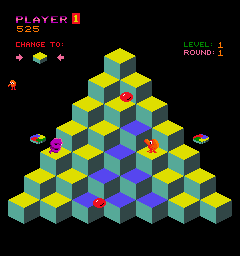 @!#?@!
Q*bert is a 1982 arcade game published by Gottlieb, created by Warren Davis and Jeff Lee. In Q*bert, the player maneuvers the eponymous character around an isometric pyramid-like structure of tri-colored cubes. Q*bert's purpose is to hop around the tops of these cubes, changing every square to a specific color (e.g., from blue to yellow).
Advertisement:

The "changing the cube colors" idea came quite late in game development. Davis and Lee had implemented the pyramid level and enemies, but were unsure of what Q*bert's goal would be. It was Ron Waxman, vice president of engineering at Gottlieb, who suggested having the cubes change color when the player landed on them.

Q*bert is harassed by an assortment of enemies. "Coily" the snake appears at the top of the pyramid inside a purple ball, bouncing toward the bottom of the screen. Once he hits the bottom row of cubes, the snake springs out from inside, hopping around in pursuit of the little orange hero. Red balls also appear at the top of the pyramid, bringing bouncing death if they collide with Q*bert on the way down.

Other threats come from "Ugg" and "Wrong-Way", a purple pig and gremlin team who bounce along the side of the cubes. Additionally, Q*bert has to deal with "Slick" and "Sam," two green creatures who turn cubes back to their original color when they hop on them. Q*bert can eliminate Slick or Sam by jumping onto them.

Q*bert's use of sound was one of its most distinctive features. The game's sound board contained a Votrax speech synthesis chip, but according to David Thiel, who created the sounds for the game, the chip's output was so poor that some words were not understandable. In frustration, he programmed it to produce random phonemes, and discovered that the result sounded like an alien language. This randomized speech, played at different pitches, became the voices of Ugg, Wrongway, Slick, Sam, and Q*bert himself. Sometimes if you're lucky, you'll get a cuss word from random babble. The only actual words that remain are "Hello, I'm turned on" when the game is booted up, and "Bye-bye" whenever you get a Game Over.

Dedicated upright cabinets for Q*bert contain a pinball "knocker" (a solenoid that creates a knocking sound) inside the cabinet whenever a character falls off the pyramid, simulating the sound that a character might make if it actually fell to the bottom of the cabinet. In some units, this sound is created by a bean bag inside the case rigged to fall. This resulted in more of a "thud" than the distinctive "pop" created by the knocker-equipped cabinets.

Q*bert was one of the characters featured on Saturday Supercade. The game has a follow-up called Q*bert's Qubes and an unreleased sequel called Faster Harder More Challenging Q*bert, a case of In Which a Trope Is Described. A home sequel, Q*bert 3, was later released for Super NES. In 2012, Disney released Wreck-It Ralph, which gave Q*bert a prominent role in the film. He also has a brief appearance in its sequel Ralph Breaks the Internet.

Of the many, many

◊ home ports of Q*bert, the MSX and NES versions were developed by Konami. The MSX version, however, starred a different-looking Q*bert that was more pudgy and reptilian, similar to the design of the dragons from Bubble Bobble. Its gameplay was based on Q*bert's Qubes, but it was perhaps more valued for the bonuses it gave to other Konami games when the cartridge was plugged into the second slot.

In 2014, Q*bert: Rebooted was released. It contains the original arcade game, and a new game with 3D graphics. The major change is that Q*bert walks in hexagonal shapes instead of cubes. The revival of the character was motivated by his appearance in Wreck-It Ralph, and he would later gain another prominent appearance in film in 2015's Pixels.

Legendary turntablist DJ Qbert got his name from this series.