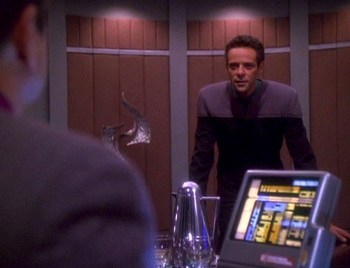 Bashir confronting Ross
In the station ward room, Kira, Worf, Odo, O'Brien, and Romulan Senator Cretak are discussing mundane repair schedules. Despite some bickering over whose ships fight the best, it's just another day in the war, though Cretak is preparing to attend a joint conference soon on Romulus where important matters regarding the war will be discussed.
Advertisement:

Bashir is attending as well, to share his expertise on Dominion biogenic weapons, among other things. Garak, who found his onetime posting there as a spy dreadfully boring, offers his condolences. He asks if Starfleet intends to do any spying of their own while they're there, which offends Bashir's propriety. Spy on an ally? Unthinkable! Garak, of course, is most disappointed by his response.

Garak isn't the only one with the idea. That night, Bashir is visited in his quarters by everyone's favorite Section 31 agent, Sloan, who "recruited" Bashir during "Inquisition". Despite all the cloak-and-dagger, his request is innocuous enough: make some private observations on the Romulans while he's at the conference. Bashir refuses, but Sloan is convinced that he'll do it anyway because the thought of being a spy is just too seductive. And with that, he's gone as quickly as he appeared.

Bashir goes straight to Sisko. His and Admiral Ross' conclusion is that Sloan's involvement does not justify making any changes to the Conference or Bashir's itinerary there. Instead, Sisko wants him to be a Double Agent, playing along with Sloan's game to get closer to Section 31. He says Starfleet Intelligence, despite its claims to the contrary, has not made any serious effort to expose them.

Sisko: They have quietly pushed the investigation aside, which means either they don't take Section 31 seriously or someone at Starfleet Command is protecting them. Either way, we now have a chance to get someone inside and I think I want to take it.

Bashir, Admiral Ross, and Senator Cretak share a glass of (now decriminalized) Romulan ale aboard the Bellerophon while en route to the conference. Ross doesn't handle it so well, being part of the 1% of officers who actually took the prohibition seriously. Then Sloan makes an appearance, posing as a civilian cartographer, to give Bashir some brief orders.

Sloan, of course, refuses to say why he's tagging along. Bashir consults with Ross, who finds Sloan's presence concerning — not because of what he personally might do, since his cover's access is limited, but because it implies there's more going on than just a bit of open-source intelligence gathering.

Later, Sloan meets with Bashir in private to debrief him on his first round of intelligence-gathering. Sloan has a particular interest in Koval, chairman of the Tal Shiar, who is ardently opposed to the alliance and competing with Cretak for an empty seat on the Continuing Committee. It is also rumored that he is hiding a rare and incurable disease known as Tuvan Syndrome. Sloan wants to know for sure. No wonder he chose Bashir, a genetically enhanced doctor, for this mission.

Koval approaches Bashir during the conference to ask a few questions about the Quickening, making no effort to disguise the fact that he is interested in weaponizing it. But at least Koval is talking to him, which according to Cretak is more than most people (herself included) can say.

Bashir's conclusion is that Koval may have early-stage Tuvan Syndrome, which would give him a life expectancy of 20 to 25 more years. It's clear that Sloan is interested in removing him from the picture, even more so when he asks if there are any ways to accelerate the progression of the disease. Ross is affronted by the idea that Section 31 may be plotting an assassination, though he does concede that having Koval on the Continuing Committee would be very bad for the alliance. It also stands to reason that, to have any chance of putting their plan into action, Section 31 must have an agent within the Romulan government. Bashir wants to blow the whistle on Sloan, but Ross is afraid of what that might do to the alliance.

To make matters worse, Ross suffers an aneurysm not long after. It's not serious, but until he recovers, Bashir is on his own. So he turns to the only other person he thinks he can trust: Senator Cretak. He asks her to help him get access to Koval's intelligence files. As head of the Tal Shiar, his notes would give them the best chance of finding the mole. Cretak reluctantly agrees.

But it would seem Bashir has managed to put himself on Koval's radar. He lures Bashir away from the conference to conduct a not-so-friendly interrogation. Bashir's genetic enhancements make him immune to the Romulans' infamous mind probes, but no matter. Cretak was also caught trying to hack Koval's files. Both of them are brought before the Committee, who are not pleased to hear their story, no matter how well-intentioned it may have been.

To top things off, Koval brings out a Surprise Witness: a badly-beaten Sloan. Under interrogation, they have found that there is no Section 31. Sloan, an ordinary Starfleet spy with a grudge against Koval, invented it so that he could orchestrate his own personal revenge. The Committee decides to let Bashir loose. Cretak, whatever her intentions, is in any case still guilty of treason. Sloan chooses to try to fight his way out and is executed on the spot.

But that's still not the whole story. By the time Bashir is returned to the Bellerophon, Ross is back on his feet. Bashir asks him what really happened to Sloan.

Bashir: The man Koval described was not the same man who recruited me into Section 31. Anyone clever enough to pull the wool so completely over my eyes wouldn't have been caught by the Romulans so easily. There had to be another explanation. And then I remembered that you were the one who planted the idea in my head that Sloan had an accomplice. You were the one who didn't want to tell the Romulans that there was an assassination plot. You were the one who issued the orders preventing me from contacting Deep Space Nine. And when the time came to arrest Sloan, you conveniently had an aneurysm, leaving me alone with no one to turn to for help except Cretak. And as I realized your involvement, the rest began to fall into place.

Ross admits that he was working with Sloan. The Romulan mole is none other than Koval himself, who faked both Sloan's story and his supposed death. Now that Cretak is discredited, his spot on the Committee is guaranteed, and with his established anti-alliance reputation, it will be all the more convincing when he later reverses his stance. Certainly, this is a huge win for the Federation, but Bashir is absolutely incensed that Ross, the model of a Reasonable Authority Figure, would be in bed with Section 31.

Ross: I don't like it, but I've spent the last year and a half of my life ordering young men and young women to die. I like that even less.
Bashir: That's a glib answer and a cheap way to avoid the fact that you've trampled on the very thing that those young men and women are out there dying to protect!
Ross: Inter arma enim silent leges.
Bashir: "In time of war, the law falls silent." Cicero. So, is that what we have become? A 24th-century Rome driven by nothing other than the certainty that Caesar can do no wrong?
Ross: This conversation never happened. You're dismissed.

There's nothing left for Bashir to do. Back on the station, Sloan pays him one last visit, to thank him for playing the part of the Wide-Eyed Idealist so perfectly.

Sloan: The Federation needs people like you, Doctor. Men of conscience. Men of principle. Men who can sleep at night. You're also the reason Section 31 exists. Someone has to protect men like you from a universe that doesn't share your sense of right and wrong.