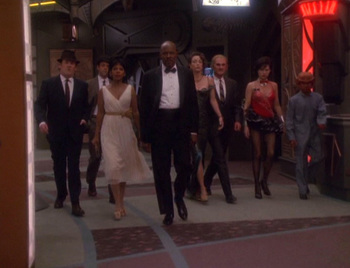 Sometimes, war just has to stop for a while so you can do some absurd bullshit on the holodeck.
Bashir and O'Brien are trying to convince Vic Fontaine to come join their Alamo hologram, but the crooner isn't interested. He sings them a song to send them off, but midway through, the crowd suddenly changes to become much seedier and rowdier. They jeer him off the stage as a retinue of showgirls arrives and performs a sexy dance. Vic has no idea what's going on, until his old nemesis "Frankie Eyes" shows up with his goon Cheech and announces that he's bought out the casino and fired Vic. O'Brien has had enough of this shocking swerve and tries to end it but finds he can't delete Frankie or freeze the program. He can't reset the program either without wiping Vic. They'll have to find a solution within the program.
Advertisement:

At Ops, Bashir announces that the creator of the program, Felix, installed Frankie as a "jack in the box," a sudden complication to shake things up and prevent the program from becoming boring. But he confirms that the problem can only be solved within the program using period-appropriate tactics. Feeling indebted to their "friend" Vic, Bashir, O'Brien, Nog, Kira, Odo and Ezri all agree to help. Even Kasidy joins in when she learns, but Sisko is mysteriously aloof to the whole idea, never having been interested in the Vic program.

The group gets together and plans a heist to steal the casino back from Frankie, who is financed by the kingpin Zemo. Kira plays the Honey Trap and seduces Frankie to distract him. Odo befriends Cheech using his shapeshifting and convinces him to hire Ezri as a cocktail waitress. Vic convinces Frankie to let him stick around on the promise to bring in a high-rolling gambler to the casino. As all of this goes down, Kasidy confronts Sisko on why he's so aloof to Vic. The captain finally admits that he finds the Politically Correct History in Vic's program distasteful, since it white-washes the fact that black people were still treated as second-class citizens in the 1960s. Kasidy argues that the program doesn't make people forget about history. Instead, it shows them how things ought to have been, where the only limitations are what they impose on themselves. Sisko is impressed by the speech.

The crew go over their plan. Kira will lure Frankie out of the casino to the bar. When one of the two money counters leaves to make a phone call, Ezri will have Bashir poison a martini with ipecac and deliver it to the lone money counter remaining. When he leaves to puke, Nog will slip inside and open the safe. Odo will transform from the cocktail tray and put all the money in a briefcase he makes out of himself. Kasidy will distract the guard by accusing O'Brien of stealing her money. Meanwhile, a high roller will win a bunch of money to further distract the gangsters on the casino floor. As if on cue, Sisko arrives to join in on the heist and takes the role of the high-roller.

It's the day of the heist, and Ezri accidentally drops her martini, but Bashir snags another drink from a nearby tray, and the heist continues. When she arrives in the money room but discovers that the normal counter has the day off and doesn't want a martini. She asks if she can drink it instead, and the man downs it out of spite. When Nog arrives to open the safe, he discovers that it has an auto-relock tumbler, which makes it much harder to crack. At the same time, Zeemo arrives and wants to inspect the vault. As Nog struggles to open the safe, Bashir shortstops the second moneylender to prevent him from returning and catching Nog. Vic accosts Zeemo's date to delay him but gets shooed away. As Nog finally opens the safe, Sisko and Bashir start throwing money around to cause a commotion and cover Nog and Odo's escape.

When Zeemo finally arrives in the money room, it's empty. Outraged, he has Frankie and Cheech escorted out, and the casino returns to normal. The gang all celebrate at the restored casino by listening to Vic sing. Sisko joins him on stage to perform a duet of "The Best Is Yet to Come," to the delight of the crew.