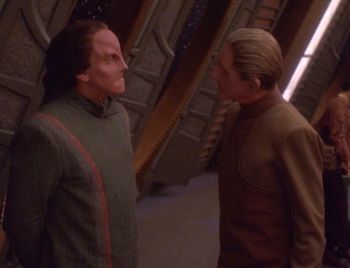 Embarrassing siblings come in all shapes.
O'Brien and Odo are returning from a conference on a runabout when O'Brien realizes he forgot to buy a souvenir for Keiko. He tries to buy one of Odo's gifts for Kira, but the constable refuses. Suddenly their runabout is accosted by a spacefaring creature that latches onto their hull. It turns out to be a Changeling, which slides into the cockpit and materializes. The newcomer is not a Founder but a member of the One Hundred like Odo, sent out as an orphan to explore the universe. Odo convinces O'Brien to take the Changeling back to Deep Space Nine.
Advertisement:

Because the new Changeling, Laas, has no trace of the morphogenic virus afflicting the Founders, Sisko agrees to trust Odo and release him to Odo's custody. Odo and Laas tour the Promenade and get to know each other. Laas is over 200 years old and has become disinterested in fitting into "monoform" society. Odo teaches him about the Dominion and allows him to experience the Great Link, which confirms to Laas that Changelings should prefer their own company.

Odo tries to introduce Laas to his friends on the station, but the Changeling spends the whole time being rude about the flaws of monoforms. Afterward, Odo criticizes him, but Laas would prefer to continue the discussion in the link. Odo refuses to do it in public, and Laas argues that his shame over shapeshifting shows that he is not accepted in monoform society. He argues that he and Odo should leave the station and search for other members of the One Hundred so that they can create their own Great Link. The idea appeals to Odo, but he cannot imagine abandoning Kira. When Kira finds out about Laas' proposal, she begins to worry that Odo isn't happy.

Odo discovers Laas shapeshifting into fog on the Promenade, which upsets people, and convinces him to change back. Two Klingons accost Laas and pick a fight with him over his shapeshifting. After demonstrating that their knives are useless on him, Laas converts his hand into a sword and fatally stabs one of the Klingons. He's arrested, and Odo tries to argue that the killing was in self-defense, but Sisko announces that the Klingons are uncharacteristically using every legal maneuver at their disposal to get Laas extradited to them for prosecution. Further, Odo isn't allowed to oversee Laas's incarceration since he's a witness, though Odo suspects it's actually because he's a Changeling.

Odo bumps into Quark, who explains that humanoids instinctively distrust people who aren't humanoids themselves. He also points out that the Alpha Quadrant is at war with the Founders, so humanoids are especially inclined to distrust Changelings. Odo gets much the same in the brig from Laas, who continues to argue that Odo has no place in monoform society. When Odo returns to Kira, he's conflicted. Although she assures him that she loves him, shapeshifting and all, she decides that Odo needs to leave to be with his people. She frees Laas and arranges him to meet Odo on Koralis III.

As Sisko initiates a search, Kira confesses to Odo that she freed Laas and urges him to join the Changeling. They share a tearful farewell, and Odo arrives on Koralis III to meet Laas. There, he tells Laas that he's decided to remain on Deep Space Nine. Laas can't understand, but Odo states that it's because Laas has never experienced love. He offers to link with Laas one last time, but Laas refuses and leaves. Odo returns to the station to reunite with Kira, who apologizes if she's ever made him feel like he can't be himself around her. In response, Odo transforms into an aura of golden light that surrounds Kira, who smiles and dances.