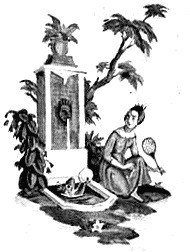 My wicked mother slew me,
My dear father ate me,
My little brother whom I love
Sits below, and I sing above
Stick, stock, stone dead.
Advertisement:

A man had a daughter by his first wife and a son by the second. The stepmother hated her stepdaughter. One day, when the girl had had candles she was bringing from the store stolen by a dog three times, the stepmother tricked her into letting her chop her head off. Then she baked her into a pie and fed her body to her husband. Her son took the body and buried it under a rose tree. In spring, when it bloomed, a bird appeared and sang in it. So beautiful was the song that a shoemaker gave her red shoes, a watchmaker a golden watch, and three millers a millstone.

This is a Gender Flip of a common folktale, where the stepmother kills her stepson, like The Brothers Grimm's "The Juniper Tree".