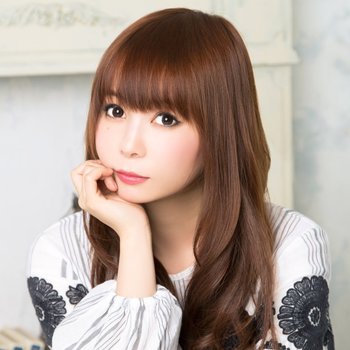 One of the few normal photographs

out there.
Shiyoko Nakagawa, known professionally as Shoko Nakagawa, is a tarento, actress, voice actress, illustrator, singer, and massive otaku, born in Tokyo on May 5, 1985. While she was originally known in Japan as the daughter of the late actor and pop singer Katsuhiko Nakagawa, Shokotan, as she's known to fans, has made a name for herself with her quirkiness and her absolute love of manga, anime, toku, video games, and big blockbuster movies.
Advertisement:

Nakagawa first began her career in 2001, but her initial fame began with her hosting of Pokémon Sunday (which she still remains on) and hit her big break in music after she was chosen to sing the opening theme of Tengen Toppa Gurren Lagann "Sorairo Days" in 2007, which was her first single to reach the top of the charts. She is an avid blogger, and for a time had the most popular blog on the Ameblo blogging service, with over 100 million hits in April 2006 and well over 1 billion hits 2 years later.

Her otaku status has no bounds, with particular reverence to Bruce Lee, JoJo's Bizarre Adventure, and Super Sentai, among many others. While she was originally represented by Jackie Chan's talent agency in Japan, she thought he wasn't a nice man because he was sometimes the villain in Bruce Lee movies. Aside from getting to interview Hirohiko Araki and get him to draw what he perceived to be a possible child between herself and Jotaro Kujo, she once did a JoJo pose on stage during one of her concerts and managed to break her tailbone. She had reportedly auditioned to be the Pink Ranger in multiple Super Sentai series due to her love of Yuri / Time Pink in Mirai Sentai Timeranger, and it was her admiration of Yuri's actress Mika Katsumura which actually inspired her to start acting rather than her late father. She even thinks Shigeki Hosokawa of Kamen Rider Hibiki (among other shows) fame is the ideal man.

On top of her acting, she is a talented illustrator with her own Pixiv profile

, which sometimes delves into the grotesque. And she has her own Youtube channel mainly for gaming right here.