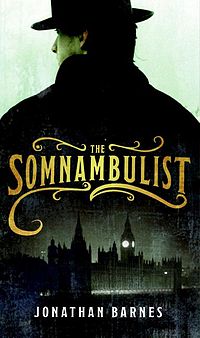 Surely I am coming soon—Revelation 22:20
"Be warned. This book has no literary merit whasoever. It's a lurid piece of nonsense, convoluted, implausible, people by unconvincing characters, written in dreadfully pedestrian prose, frequently ridiculous and willfully bizarre. Needless to say, I doubt you'll believe a word of it.
—The Narrator
Advertisement:

Jonathan Barne's debut novel, The Somnambulist is a Gothic Horror Fantasy set in the late Victorian period. The story follows washed-up magician and amateur detective, Edward Moon, as well his companion, The Somnambulist, on their journey to solve their first truly big case in quite some time. What seems to start out as a simple murder, however, is soon revealed to be part of a larger conspiracy that could destroy all of London. There also also several subplots, including a top secret organization known as The Directorate, Edward's sister, his former pupil, as well as a man who lives backwards in time, and is hinted to be the first king of London. Only some are explained in detail. A sequel, The Domino Men, was published a few years later.