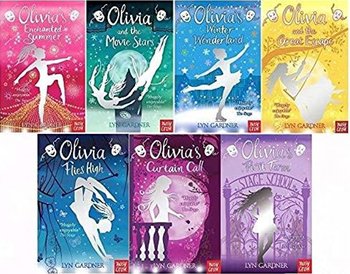 The seven books in the series
Advertisement:

Stage School is a British middle grade book series by Lyn Gardner, revolving around tween Olivia Marvell, her younger sister Eel and her friends at her grandmother's Swan Academy of Theatre and Dance.

Olivia, a Circus Brat, returns to London with her sister and widowed father. The Marvells are left penniless after patriarch Jack Marvell suffers a Career-Ending Injury, and the girls must live with their maternal grandmother Alicia Swan, the owner of a prestigious stage school for children aged 7-16. Olivia is not at all thrilled to drop tightrope-walking and learn the "proper" performing arts, since, unlike her sister, a gifted dancer, she has no West End-worthy talents. Can the school's Black Sheep find her place at the Swan, and will Tightrope Walking help her in this endeavour?

The series is comprised of seven books:

The series displays examples of the following tropes:

open/close all folders
Olivia's First Term
After renowned circus performer Jack Marvell loses all of his money and is forced to disband the circus, he takes his young daughters Olivia and Eel to his estranged mother-in-law, the owner of the prestigious Swan Academy of Theatre and Dance, in the hopes that she can provide them with a home and an education while he tries to regain the family fortunes. Thus, Circus Brat Olivia and her dancing little sister Eel end up enrolled in a stage school. Can Olivia fit in?
Olivia Flies High
When her new best friends Tom and Georgia are cast in a West End musical, Olivia feels abandoned and has a major falling-out with them. With a scheming Katie Wilkes-Cox back on the scene, will she manage to make things right before it's too late?
Advertisement:
Olivia and the Movie Stars
A pair of famous twins arrive from Hollywood to star in a West End production of Peter Pan along with their equally famous father. They turn out to be different from Olivia's expectations, not completely for the best. On top of this, the noise coming from the construction next to the Swan disrupts everybody's lives, and one of the twin stars is being sabotaged. Can Olivia figure out the mysteries around her?
Olivia's Enchanted Summer
During their summer holiday, the Swans travel to Edinburgh to set up the Swan Circus. But a few chance encounters open up a mystery Olivia is itching to solve, and a potential threat to her position as her father's favourite highwire partner.
Olivia's Winter Wonderland
With the new school year come new opportunities for the Swans: a bestselling book series adaptation is looking for its young star, and the Swan is organising their charity panto, Cinderella. Swan graduates-turned-big-names return to their school to help with it, but a talentless primadonna wreaks havoc on the production. Meanwhile, Olivia and Tom discover a mysterious secret in an old building.
Olivia and the Great Escape
While Jack Marvell prepares to break a highwire world record, the Swan welcomes new pupil Alex Parks. He manages to charm everybody (save for Olivia) and make his way into the gang. But as the school works on its production of A Midsummer Night's Dream, its plot appears to reflect the pupils' reality a bit too well. Meanwhile, Eel sets out to test the extent of her talent for dancing.
Olivia's Curtain Call
On the brink of her 14th birthday, Olivia is offered the opportunity of a lifetime - to play Juliet in a West End production of Romeo and Juliet opposite Swan graduate Kasha Kasparian. But when her father asks her to join him and Tom on a circus tour, she has to choose between her parents' passions. Meanwhile, love is all around as Kasha's secret relationship with Abbie grows in the midst of a family feud, Eel is trying to find her dad a new wife, and Olivia's feelings for Tom start to change.