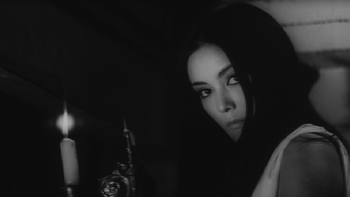 The Living Skeleton is a 1968 film from Japan, directed by Hiroshi Matsuno.

The prologue jumps right into the action, as pirates have hijacked a cargo ship, the Dragon King, and are holding the crew at the point of machine guns. Various people beg them for mercy, including the ship's doctor Nishizato and his wife Yoriko. The pirates don't listen and machine-gun the lot of them, including poor Yoriko, but not before raping her. The ship is reported as missing, presumed lost in a typhoon.

Cut forward three years. Yoriko's twin sister Saeko (played by the same actress, Kikko Matsusoka) has no surviving relatives. She lives in a seaside village, where she works as assistant to the local Catholic priest, Father Akashi. She is lovers with Mochizuki, owner of a local restaurant. One day the two of them are out scuba-diving when they find human skeletons, bound by chains, sitting at the bottom of the ocean (the victims on the ship were bound together by leg chains). Saeko, who when her twin sister was alive often felt a psychic connection with her, feels compelled to take a motorboat out to sea. She finds the Dragon King still afloat, drifting. She sees the ghost of her sister. Then she finds the ship's log, which describes how the ship was hijacked by five pirates.

Cut to the five pirates, who are all off living their lives, in varying circumstances after splitting 300 million yen, which was what they got for selling the gold bullion that they stole from the ship. They soon all begin seeing what appears to be the spectral presence of Yoriko. Then they start to die one at a time.