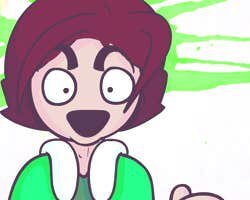 We begin your journey from when you're conceived.
Where your life goes from there, you will never believe.
Advertisement:

All people lead different lives. The direction they take is decided by your actions, your successes, and your failures. But what if your life was only really changed at a few crucial moments, and what if all those lives were just long series of WTF moments? In this flash game, you are armed with only the arrow and X keys, as you raise your character from the foetal stage as a man, woman, or a two-torsoed gender hybrid. With Egoraptor as your host, a line of minigames unfolds, taking you through the strangest of misadventures, to unlock 29 different endings.

Your fifty-inch rims and a tank full of gas, you cut people off and drive like a... jerk.
Take a few seconds, reflect your result.
Now Relieve your Life, from sperm to adult.