The Gift II: The Giftening 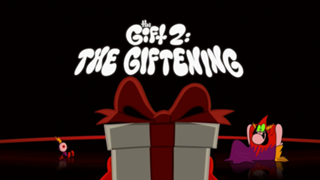 Commander Peepers: The gift has made him... happy.
Advertisement:

When mysterious gifts begin appearing on Lord Hater's ship due to the courtesy of Wander, the Watchdogs end up turning into happy, gift-loving zombies. Lord Hater has to avoid the gift spree and find a way to escape before he ends up becoming zombified as well.

It's a special holiday time of year where once every 365 Yuletidian cycles, a cluster of interstellar temporal neutrinos collides with a passing dimensional space vortex, resulting in a massive chronal jet stream, which Wander and Sylvia use to travel through the universe in one day by delivering presents to everyone they've met the past season. However, it later gets shook up when Wander decides to sneak onto Lord Hater's ship and give some presents to him and the Watchdogs as well, hoping to spread happiness to the evildoer's army.

Return to the main Wander over Yonder page, or back to the recap page.