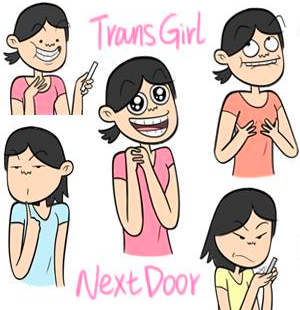 "Your friends know I have a dick"
Trans Girl Next Door

is an autobiographical webcomic by Kylie Wu hosted on Tumblr. It follows Kylie's adventures coming out and subsequently living as a transgender woman, and all the hilarious awkwardness that comes her way.
Advertisement:

It should be noted the comic contains Not Safe for Work content, so the first strip is linked above instead of the main page.

Tropes in this webcomic include: