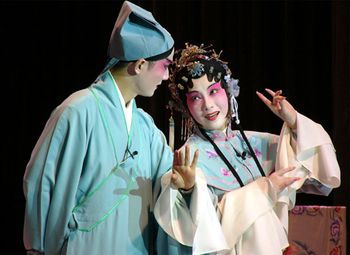 "Love is of source unknown, yet it grows ever deeper. The living may die of it, by its power the dead live again. Love is not love at its fullest if one who lives is unwilling to die for it, or if it cannot restore to life one who has died. And must love that comes in dream necessarily be unreal? For there is no lack of dream lovers in this world. Only for those whose love must be fulfilled on the pillow, and for whom affection deepens only after retirement from office, is it an entirely corporeal matter.
— Preface to The Peony Pavilion

Tang Xianzu's kunqu opera The Peony Pavilion, or 牡丹亭 (Mǔdāntíng), was Ming-dynasty China's answer to Romeo and Juliet. A lyrical celebration of romance that premiered in 1598, it ignited the Chinese equivalent of the Romantic movement— the cult of qing, or sensibility. It also spawned an outpouring of Fan Art, Fanfiction, and Fan Wank in the form of readers' commentaries, making these behaviors Older Than Steam. Crazed Fan Girls were said to offer themselves up to Tang on a regular basis, while Fan Boys busied themselves painting miniatures of the play's winsome young heroine to sell for cheap.

The Ingenue, budding Du Liniang ditches her lessons one day to take a nap in the garden. Asleep, she meets dashing scholar Liu Mengmei, who romances her in her dreams. Long after she wakes up, Liniang continues to obsess over her dream and begins to waste away from literal lovesickness. She dies, but not before leaving behind a portrait of herself at the height of her beauty.

Liu Mengmei shows up in her old haunt, the flower garden, looking for the beautiful maiden he fell in love with once in a dream. He takes up residence in the shrine dedicated to his unknown lover's memory and pores over her self-portrait each night with no clue who the subject is. Meanwhile, Liniang descends to the underworld, where a sympathetic judge decides she deserves one last shot at love.

The Peony Pavilion contains examples of: