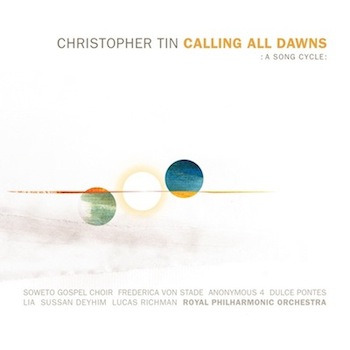 Baba yetu, yetu uliye, Mbinguni yetu, yetu amina...
Calling All Dawns is a 2009 Classical Music album, and the debut album of composer Christopher Tin. Recently, he was known for producing the first piece of video game music to win a Grammy, Baba Yetu, with a re-recorded version included on this album.

The album consists of three movements: Day, night, and dawn. These correspond to life, death, and rebirth, respectively, and each song is written accordingly. Notably, despite there being a total of twelve tracks on the disk, each one fades into one another in a way that makes it feel like one continuous song, effectively playing along with the life cycle theme of the album.

The album, self-published by Tin himself, was released to universal acclaim, even winning a pair of Grammys in the process, and for once there's a good reason for that. Each song is very well-produced, with a consistent level of quality throughout, and the guest vocalists and choir give it a distinctly different feel from what is normally expected. Impressively, one group did a cover of Mado Kara Mieru before it was even released. Overall, it's definitely worth buying.

The album can be bought at the artist's website,

and also on Amazon, where all reviews save one give it 5 stars. The single 4-star review has nothing bad to say, either.

A follow-up album, The Drop That Contained The Sea, was released in May, 2014.

Tropes seen in Calling All Dawns include: