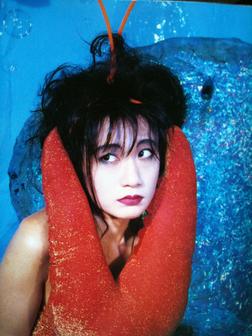 "There is a feeling I've had ever since childhood: that there exist many different 'worlds' and I was born in the wrong one, a world I don't quite fit into. I've felt this strong feeling of wrongness all through my life. There is no space for me in this world. Every time I believe I've finally found my place, someone comes to me and says 'Go away! You're not supposed to be here'"
Advertisement:

Jun Togawa (born March 31, 1961) is a Japanese singer, musician and actress whose career has spanned for over 35 years. She began her music career in the early 80's, as both a solo artist and as a vocalist for the bands 'GUERNICA' and 'YAPOOS'. She has experimented in many musical styles over her career, but she's most well-known her bizarre and morbid lyrics, and switching her singing style from cutesy vocals, to operatic to screaming (sometimes all within the same song). While she never received notable commercial pop success, she became an influential figure in the Japanese underground music community, and especially within the ero-guro subculture.