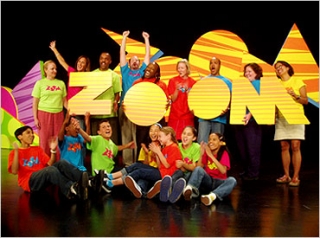 The ZOOMers, old and new.
Advertisement:

Zoom (stylized in all-caps as ZOOM) is a TV show first created in 1972 by PBS affiliate WGBH in Boston, and which ran until 1978. Here, a cast of ethnically diverse kids called the ZOOMers (who change every season) do various activities requested by viewers who write in during the show, such as games, arts & crafts, poems, and jokes.

In 1999, it was given a revival, which lasted until 2005. Although it quickly became a PBS Kids standard, the show became notorious for being Lost Media thanks to never getting an official release, and earlier seasons eventually getting dropped from rotation. (The program went off the air a few years after it ended and it was many years before much of the series appeared online; as of 2021, 27 episodes from the first season are still impossible to find unless you have a recording of them.) In the latter year, it was followed by a far more popular Spiritual Successor called FETCH! with Ruff Ruffman.

The revival contains examples of: