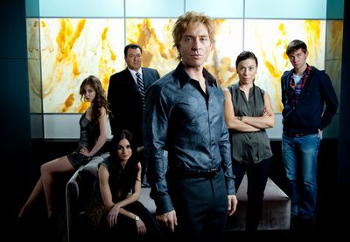 Checkmate.
Former World Chess Champion Arkady Balagan uses his abilities to solve crimes. Suffering from agoraphobia ever since the murder of his fiancee Rosemary Venturi, Balagan is unable to leave his Vancouver hotel. His inability to travel has seriously impinged on his ability to make money, or access assets held out of the country, and his luxury suite is building up quite the bill (which the hotel would like to have paid). In order to scrape up enough cash to keep the hotel from evicting him (or forcing him to move to a cheaper room) he starts using his chess skills to solve crimes (which he refers to as "People Puzzles").
Advertisement:

Since Balagan can't leave the hotel, he is assisted by various members of the hotel staff, including Alcina the housekeeper and Danni the barkeep, and Samuel Besht, a university grad student/chess enthusiast who does Arkady's leg work in exchange for chess lessons.

An ongoing background case in the series is the circumstances of his fiancee's death, which he investigates alongside his fiancee's younger sister Pippa.

The show lasted from March to June 2011, airing on Canada's Showcase Television, with a total of 13 episodes in a single season. A fan campaign for its renewal was ultimately unsuccessful.