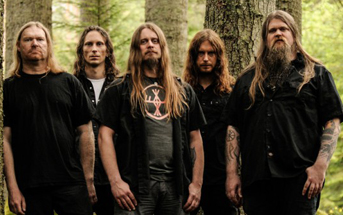 Enslaved are a Black Metal and Progressive Metal band from Norway. Well-known for their interest in Norse paganism, their philosophically-inclined lyrics, their long, complicated songs and their old habit of dressing up in Viking armor for photo shoots and concerts (they haven't done it in a long while, but they are kinda remembered for it). Their music is characterized by the aforementioned long songs, a combination of Harsh Vocals and more melodic singing, Progressive Rock touches (like keyboards, quiet parts and numerous tempo/time signature changes in many of the longer songs) and a strong Norwegian folk music influence. They're generally regarded as the second-most influential Viking Metal band in history (after Bathory, who invented it), and the ones responsible for much of its current definition.

They were formed in Norway back in 1991 by Ivar Bjornson and Grutle Kjellson (also known as Kjetil Grutle). Their name was taken from an early Immortal demo track, "Enslaved in Rot". While they began playing pretty typical Black Metal, they began to add weirder structures to their music, as well as writing longer and more complicated songs. They also deviated early on from the standard Black Metal concerns (Satan, the occult, etc.) in favor of writing about Norse Mythology. They rejected the label Black Metal entirely, preferring to call their music "Extreme Metal".

On their early albums, the lyrics were all in Norwegian, Icelandic and various old Norse dialects. As well, they tended to be more consistently brutal (with Frost being perhaps their most aggressive album). Their first release (other than the usual demos) was the Hordanes Land EP - three tracks of very primitive sounding Black Metal with long (7-13 minutes each) songs and the odd synthesizer accent. It was re-released a while later as a split with fellow Black Metal band Emperor. This more-or-less set the tone for their early albums - Vikingligr Veldi, Frost and Eld - each of which contained epic-length songs and plenty of aggressiveness, with the occasional quiet part or keyboard to break up the hypnotic, blurry riffing. The most notable change in this period of the band's history is the departure of original drummer Trym for Emperor after the re-release of the band's Yggdrasill demo as a split with Satyricon and his replacement with Harald Helgeson, who only lasted long enough to tour and record Eld before leaving himself.

For the recording of their next album, Blodhemn, the drummer's hot seat was occupied by the oddly-nicknamed Dirge Rep. Around this time they also added a second guitarist, Roy Kronheim. Blodhemn differed from previous releases mostly due to its cleaner, heavier-sounding production (by Peter Tägtgren, of Hypocrisy fame). Their next album, Mardraum, was something of a change in sound for the band - they began to write more complex songs, with more tempo and time changes than before. The next album, Monumension, took things even further, with the Progressive Rock influence even more prominent and with the lyrics now in English to boot! This pissed off a few hardcore fans, but brought in a lot of new fans as well, and the change was mostly well-received.

The next few albums continued in the same general vein as Monumension, save for getting another new drummer (Cato Bekkevold) and replacing Kronheim with new guitarist Arve Isdal for Below the Lights, and adding a keyboardist and second vocalist (Herbrand Larsen, who performed most of the clean vocals while he was in the band) for Isa. The lineup remained consistent from Isa through In Times, as has the quality and style of the band's work; Larsen departed in 2016, to be replaced by new keyboardist/vocalist Håkon Vinje for ᛖ, while Bekkevold departed in 2018, replaced by Iver Sandøy for Utgard. They also appeared prominently in the Metal: A Headbanger's Journey documentary, exposing them to yet more fans.

The band members have been involved in a fair number of side projects as well. Most of the band collaborated with Norwegian noise duo Fe-Mail under the name Trinacria; they produced the album Travel Now Journey Infinitely (2008). Members of Enslaved also collaborated with their fellow countrymen Shining (not the Swedes) for a series of compositions called the Armageddon Concerto. This has yet to be released in its entirety, but some of the material from the concerto appears on Shining's album Blackjazz, and Grutle Kjellson delivers guest vocals on two tracks. To confuse matters further, Enslaved has also released a split with the Swedes. Ivar Bjørnson was a member of Borknagar for awhile and currently has a neofolk-influenced collaboration with Wardruna's Einar Selvik entitled Skuggsjá, which released its debut album in March 2016. Arve Isdal was a member of a supergroup with Immortal members entitled I, which released the album Between Two Worlds in 2006.

Their most recent album is Utgard (2020). In short, Enslaved have been around for nearly three decades now, and continue to deliver some pretty awesome work.

Tropes that apply to Enslaved: