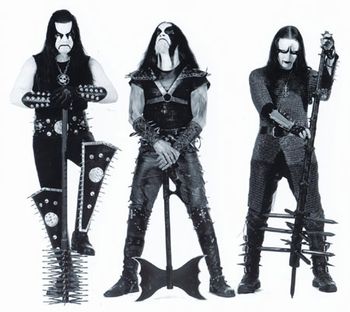 Hearting mountains since the dawn of time.
Advertisement:

One of the more famous Black Metal bands, possibly the most famous behind Mayhem, and the ones responsible for the genre's stereotypical image.

Immortal was formed by Abbath and Demonaz Doom Occulta after their previous band, Amputation, didn't take off. The band's beginnings can also be traced back to the death metal band Old Funeral, of which both Abbath and Demonaz were members.

Their earlier releases were in a more traditional black metal style, but as of the acclaimed At the Heart of Winter, they have fused black metal with elements of German Thrash Metal, also bringing in a mild Progressive Metal influence. This is partially due to Demonaz getting severe tendinitis in his arms that forced him to stop playing guitar at the time, resulting in Abbath taking over guitar duties. Euronymous of Mayhem is credited for getting Abbath into black metal and as a result, Abbath getting the infamous Varg Vikernes into black metal as well; however, despite these associations, Immortal's primary members have never been involved in the more controversial activities of some of their contemporaries in black metal, and their lyrics have also never involved the religious or political ideologies often associated with the scene.

The band split up in 2003 for various personal reasons. Afterwards, Abbath formed the Supergroup I with various other musicians from the Norwegian black metal scene (including members of such groups as Enslaved and Gorgoroth); the group released the album Between Two Worlds in 2006 to critical acclaim. The band's style is generally considered to be a fusion of Black Metal with the style of Motörhead, also referred to as "black and roll", and has been considered an influence on the later work of other bands, notably Satyricon. I is currently on hiatus, although three of the band members did appear on Demonaz' 2011 solo album March of the Norse.

Immortal reformed in 2007 for a string of live performances; after the reunion, the band decided to reform the band on a permanent basis, releasing the album All Shall Fall in 2009. However, internal conflicts between the band members resulting from tumultuous recording sessions for the band's ninth album resulted in a second disbandment in 2015. What exactly occurred during the sessions seems to depend upon whom you believe, but in the wake of the disbandment, Abbath started a new band in his name (which admittedly is a well known quantity in the world of black metal, so it's a sensible business decision) with bassist King ov Hell and drummer Baard Kolstad.

On August 14, 2015, Demonaz and Horgh announced that they had reconvened the band and that they will continue without Abbath. Demonaz took over the lead vocals and also returned to guitar, having recovered from his tendinitis after having surgery to correct it in 2013. Abbath's first, self-titled album was released in January 2016 through Season of Mist and apparently consists largely of material written for what was supposed to be Immortal's new album before the split. (He will release his second, entitled Outstrider, in July 2019.) Meanwhile, Demonaz and Horgh decided to write and record Immortal's ninth album, Northern Chaos Gods. It is currently unclear how much of the material on this album dates back to the sessions from when Abbath was still in the band, or whether his contributions from those sessions were subjected to an Orwellian Retcon. In January 2018, they announced they had finished the recording, which was released in July by Nuclear Blast to substantial acclaim. The sound on this album is much closer to the band's earlier Pure Holocaust-era sound, which should come as no surprise given the personnel shift, though they do maintain some mild aspects of their At the Heart of Winter sound.

Please do not confuse them with the film of the same name or, if such were even possible, "My Immortal".

Tropes that apply to Immortal: