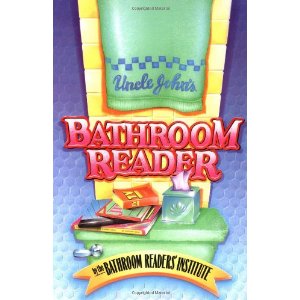 A series of books first published in 1988, composed of trivia, humor and reference all rolled into one. As the name implies, it is ostensibly something to read while sitting on the toilet, and comes with a laminated cover (presumably for waterproofing), and articles are rated by length, so that you can decide what to read based on your, ahem, needs. The books include articles on various historical topics, pop culture trivia, dumb criminal stories, quotes from famous (and not-so-famous) people, assorted lists, and much more. The content is presented somewhat tongue-in-cheek, not at all shying away from wordplay and the occasional Toilet Humor, but still manages to be highly entertaining. As if the stories and lists weren't enough, each page also has "running feet" — a little fact printed at the bottom margin.

The number of volumes has been constant since the beginning, not counting a multitude of Spin Offs (e.g., special versions for kids and even for mothers; the "Plunges into" series, where each story centralizes on a certain topic; various puzzle and Sudoku books). Other volumes have been amassed into "Best Of"s.

The Bathroom Reader series covers topics both interesting and obscure; witness the story of Emperor Norton

— of San Francisco, as well as the history of the GI Joe action figure and historical dissertations ranging from the evolution of money to the French Revolution.

In 1964, the BBC reported that Ringo Starr had his toenails removed. It was actually his tonsils.