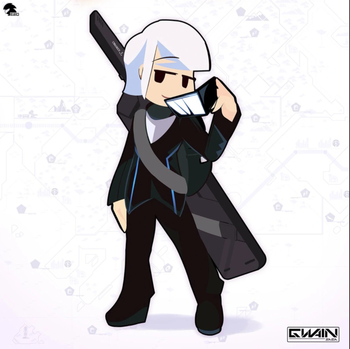 An everyday human dropped into the setting of the story, where his biology makes him a superbeing. He doesn’t seem to talk much, and very little is known of his life before Gwain's kingdom. 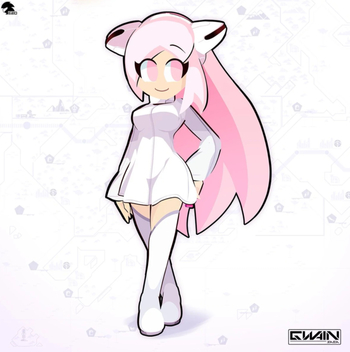 The princess of Gwain's kingdom, though she doesn’t seem to have much in common with her mother. She wears a cat-ear headband (rabbit-ear in one flashback) that both sustains her from a fatal illness and transforms into a magical bow. Her magic specialty is the Element of Love.

One of Ami's friends and cousin to Deva, he's your classic anime pervert and usually serves as the comic relief for the group. His magic specialty is the Element of Fire.

Savien
One of the students at Gwain University who is quite the charmer. Has Hypnotic Eyes.

The apparent Big Bad of Gwain Saga. A dark-haired scientist and owner of Moon Tech, supplier of everything electronic in Gwain's kingdom. With her seemingly endless selection of machines, Luna enjoys visiting pain upon Geo and his friends.

Gwain
The titular queen of Gwain Saga. Extremely powerful and distrusting of humans, though for her daughter's sake, she has assigned Geo as Ami's bodyguard. However, should anything go wrong, Gwain would just kill him outright. A stern, stoic, but well-meaning woman, though she can be downright nasty towards Geo. Her magic specialty is the Element of Light.
The Delivery Guy

A person with purple hair who appears to be the one and only postal worker in the kingdom. Has no current name or identification.

A mysterious woman who provides Geo with the EXE Blade and his visor. She was also shown briefly in the intro of episode 1, where she was imprisoned for a time.