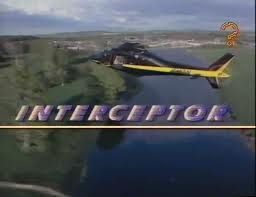 1989 Thames Television game show. It only had 8 editions (due to reasons of ITV politics) considered a Cult Classic and turns up in re-runs among the other vintage Game Shows on the Challenge channel every so often. Hosted by Annabel Croft, a former tennis player and star of the not dissimilar series Treasure Hunt, from which Interceptor was a Spin-Off.

In essence, hide-and-seek with a helicopter.

Two contestants (one male, one female) were given two outwardly identical backpacks, each being a kind of wearable strong-box. One was empty, the other contained £1,000, a respectable but not lavish sum in 1989. They were blindfolded before being dropped by helicopter six or seven miles apart in scenic areas of rural Britain, with just a compass and a large walkie-talkie set each. They then had to establish their positions by describing their surroundings to Annabel, navigate across country to find a strategic location where the key to the other box was secreted, and meet up, all within 40 minutes.

Standing (or rather flying, driving, riding and flipping over five-bar gating) in their way was The Interceptor, a blond and angry Scottish dude in black leather Badass Longcoat with an infra-red zapper mounted to his left sleeve. He had twenty shots in it, with each backpack having five separate receivers. One hit on any of them – the box was locked permanently.

The way to avoid this, of course, was not to show your back to him (IR rays not being capable of going through a human body – try it with your TV remote at home), which was harder than it sounds and resulted in unintentionally amusing face-offs.

"), and no-one knew if either box was locked until the contestants rendezvoused at the end of the show.

This was one hard game show to win.