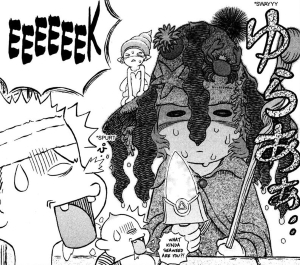 Schierke, in this case, is not amused.
Advertisement:

Berserk, being a cesspool of gloom, doom, and utter suckiness, is probably the last place you were expecting to find humor, much less hilarity. However, this otherwise grim epic is sprinkled with moments of Black Comedy, Gallows Humor, snark, and sometimes even outright silliness. If you're gonna be reading one of the darkest seinen manga currently being published, you'll be grateful that there's some laughs to take the edge off and help you keep your sanity.

For more laughs, check out the funny pages of Berserk (1997) and Berserk: The Golden Age Arc, especially for the former's Hilarious Outtakes.