You. An average Joe/Jane who, through one channel or another, stumbles upon knowledge of the Hours and decides to find a way to become immortal, no matter what or who has to be sacrificed to do it.

The Aspirant
"June the 28th, once again."

An everyman who ekes out a meager existence as a hospital orderly until a patient wise in eldritch matters takes a shine to them, and decides to pass on what they've learned...

The Bright Young Thing
"Endowed from birth with wealth and talent. A life of ease, comfort and delight stretches ahead like an amber carpet."

A bored heir(ess) to a rich family, they mostly waste their days doing whatever strikes their fancy... until their father, who recently had grown rather careless with his fortune, takes mysteriously ill and dies. It's only when going through their father's papers that they discover exactly what papa had spent all the money on...

The Detective
"I am an Inspector in the capital's police, charged with the investigation of the most vile and wretched things that one human does to another."

A detective in the Suppression Bureau, the secret police division tasked with keeping the existence of occult phenomena under wraps. However, they can only stave off curiosity for so long, and a chance look at some old case files starts them on a very different path...

The Physician
"As the patient descended into the final delirium, I made copious notes. In the buzzing heat of the night, I re-read those notes, and they began, at last, to make a kind of sense."

A respected doctor at an accredited institute, their whole life is a breeze... until a patient arrives who makes some rather startling proclamations. They don't understand at the time, but one muggy night, they read the notes they took on the patient's ramblings, and the truth of their words finally sinks in...

The Dancer
"I am young and I am strong and for a time yet I will be beautiful."

A dancer at a club called the Gaiety, who finds a mysterious poem in an abandoned shoe which sparks something in them, leading them to the Ecdysis Club, and its mysterious proprietor, Sulochana Amavasya...

The Priest
"In visions have I seen St Agnes. I have learnt not to speak of the form she takes."

A priest of little import, who delivers quiet sermons at a quiet parish after getting in trouble for speaking of things they shouldn't have. One day, though, a strange wound appears on their body, and it reopens their mind to the worship of more eldritch gods...

The Medium / "The Ghoul"
"Everyone knows that I speak with the dead. I have been called a prophet, and a ghoul. I have no reason to disabuse them of their illusions."

A bogus medium who, one day, becomes a conduit for the real voices of the dead and delivers a terrifying prophecy. Unfortunately, it gets them fired, and they are left with nothing but the clothes on their back and a few names rattling around in their head: Montmerenzi, Naenia, and a mysterious third party. The names spark a memory in them, and they head to the Montmerenzi-McDonald Gallery, finding a mysterious painting that seems to speak to them, calling them into the service of the Elegiast...

The Exile
A very different character from the others. You are a former member of the Reckoners: an occult mafia that trades in years of life. You are not a cult leader, and definitely not an Adept. You are an adventurer and fugitive trying desperately to run far and fast enough to stay ahead of your pursuers. Oh, yes. You betrayed your mentor, stole seventy seven years of life, and ran for it. Did we forget that part?
The Apostle

A follower of the PC who remained loyal after their ascendancy to Longhood, and plans to help them rise even higher to become a Name. Unfortunately, it's not so easy as it sounds: to gain great power for their master, the Apostle must pay an unimaginable price, and besides, other Long are not so keen on letting others rise above them...

"The Illuminated One waits in the House of the Sun - waits to rise higher. I am their hand."
The Apostle of a Lantern Long, seeking to aid their ascension as a Name.

"The one who nourished us has ascended to a higher state... in one history, at least. The past is uncertain. But I will prepare the feast for their next ascension."
The Apostle of a Grail Long, seeking to aid their ascension as a Name.

The various fools and dreamers who follow your characters, whether to their deaths or to unimaginable power.

Hangers-On/Pawns
"I have negotiated this one's service for a little while."
Slee
"Craig Slee, the astronomer and avant-garde poet, has developed an interest in the esoteric as his health wanes."
"Pope" Clifton
"A bellowing and unorthodox Catholic with a mystic streak and an untrimmed beard."
Cat Caro
"'Cat Caro', as she styles herself, earns a living as a stage medium and a fortune-teller. She may have deeper talents."
Tristan
"Tristan dislikes distractions. Tristan gets things done."
Valciane
"Valciane has operated her establishment for almost twenty years. She has never employed an assistant. Her hands are terribly strong."
Laidlaw
"Laidlaw is a tinkerer and mechanic with an uncanny knack."
Rose
"Rose is a sly miss, and she recognises you as someone uncommon."
Elridge
"An elegant man of inelegant habits."
Victor
"Victor is a sly fellow, and he knows an unusual opportunity when he sees it."
Violet
"Violet has always given unstintingly of her time, easing the pain of the dying."
Auclair
"Auclair has a scholarly aspect and a morbid streak."
Dorothy
"Dorothy is an enthusiastic sort with an eclectic reading habit. She's fascinated by my hints about the shapes beneath the world's skin."
Clovette
"Clovette is happy in a way that brooks no counter-argument to happiness."
Leo
"Leo is an earnest sort with an interest in the occult. He hangs on your hints about the invisible arts."
Saliba
"Saliba is a man of prodigious appetites. He is long past the point where their satisfaction has given him any pleasure; but he has learnt so very much."
Renira
"Renira has been found not guilty three times in three separate jurisdictions. She will likely never be found guilty of anything."
Sylvia
"Sylvia lost her eye in the woods when she was nine years old. Every year, at Candlemass, she returns to the place she buried it."
Porter
"Porter was a barber, until the court case."
Ysabet
"Ysabet has always been most comfortable by moonlight. She has excellent night vision. She is often overlooked in daylight."
Neville
"Neville pauses before he speaks, and flinches easily. He laughs whenever he thinks you've made a joke."
Enid
"Enid speaks softly, and sometimes her gaze doesn't focus on anything visible. It may be that you've dreamed the same dreams."

In General
Poppy Lascelles
Mme Bechet
Count Jannings
Dr Ibn Al-Adim
Sulochana Amavasya
The Ligeans
A group of several old, powerful, and hungry entities that consider each other sisters. They are all Alukites of various forms, and are extremely dangerous, but are usually willing to work with you for the right consideration.

Marinette, 'Our Lady of Wires'

What Is Not Seen

In General
The Moth 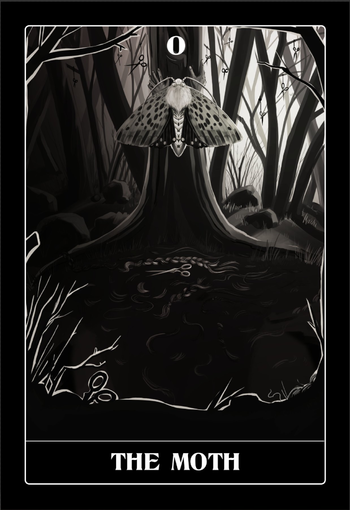 The Door In The Eye 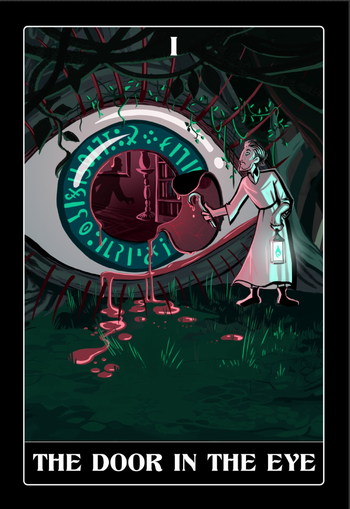 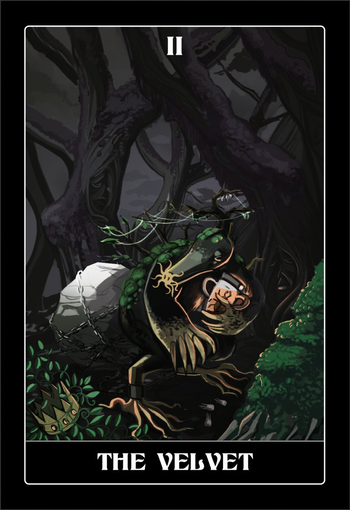 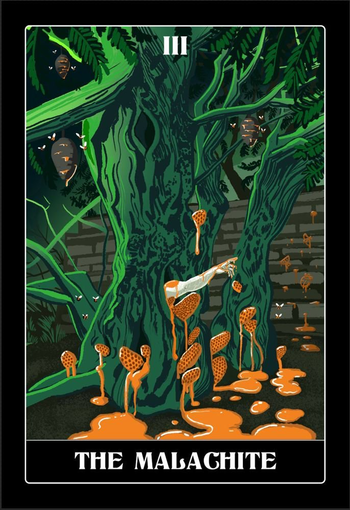 Also known as the Ring-Yew. 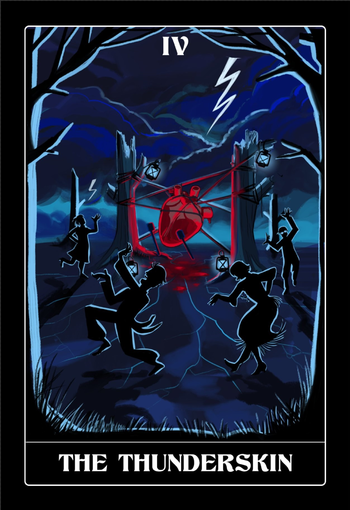 Also known as the Heart Relentless and the Vigilant Storm.

The Mother of Ants 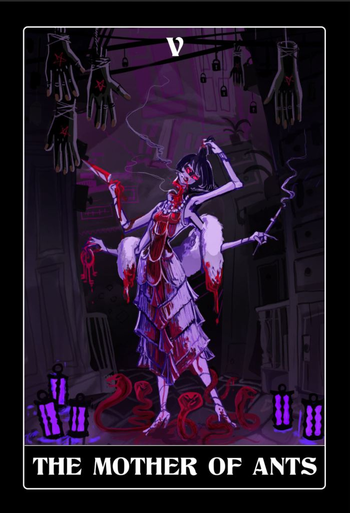 Also known as the Daughter of Venoms and the Key-Serpent. 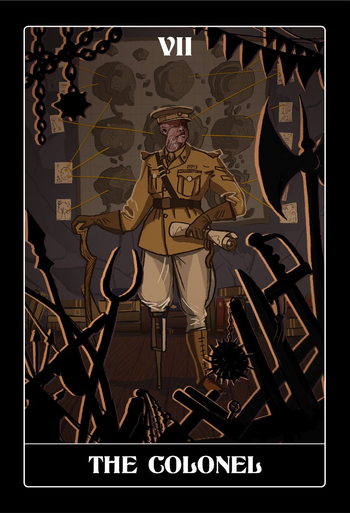 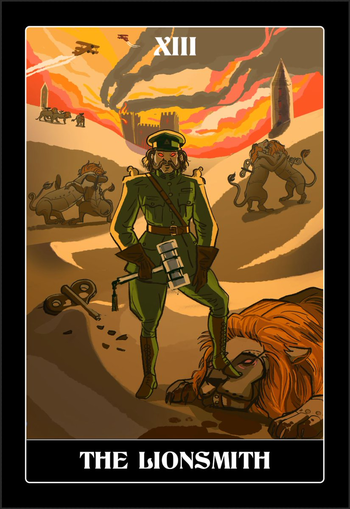 Also known as the Golden General. 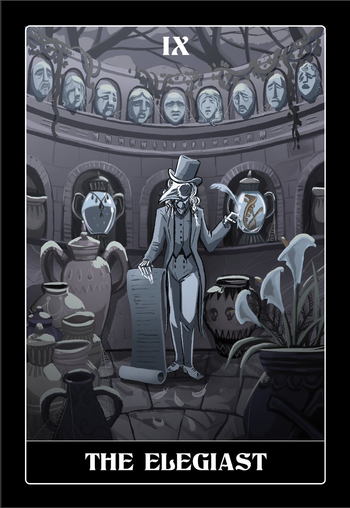 Also known as the Ivory Dove. 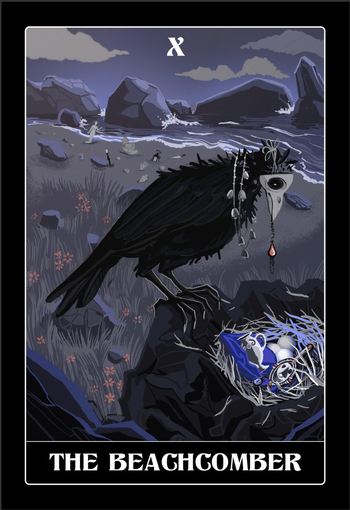 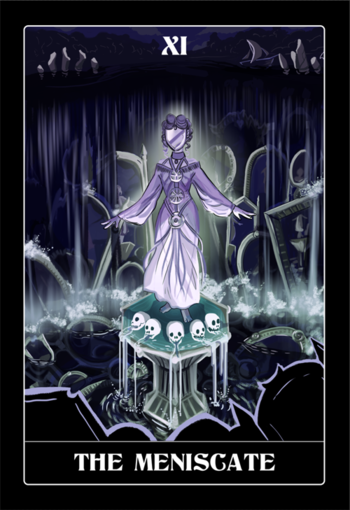 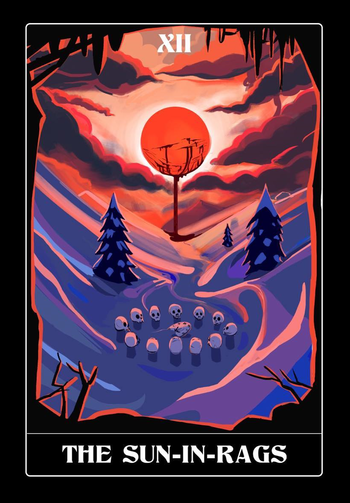 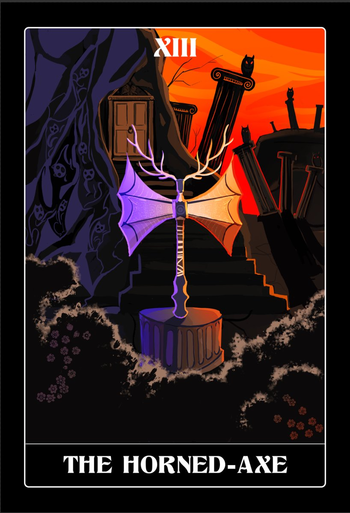 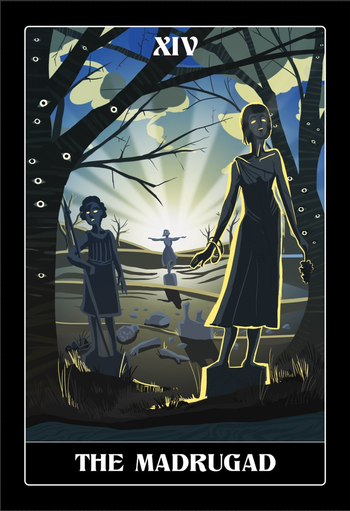 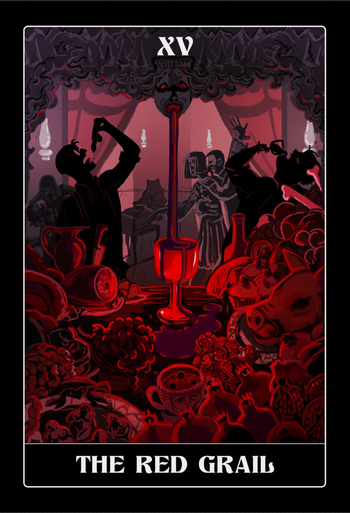 Also called the Great Mother and the Source. 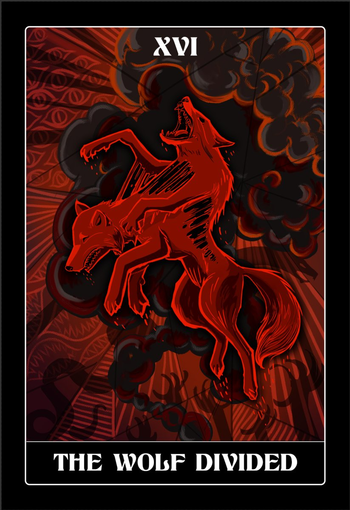 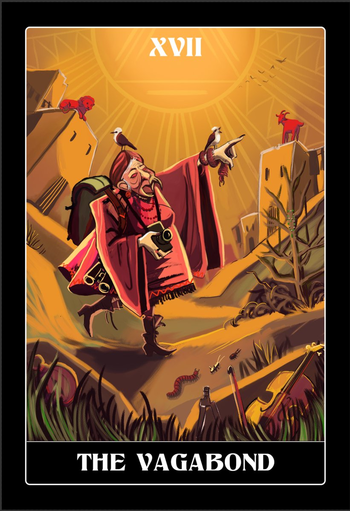 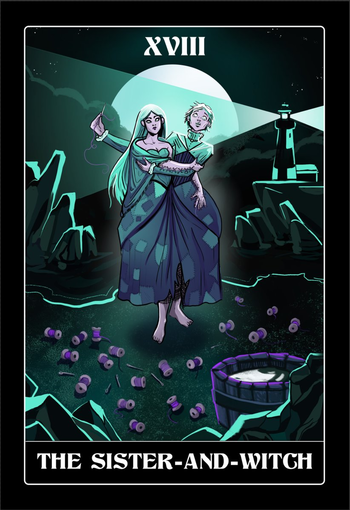 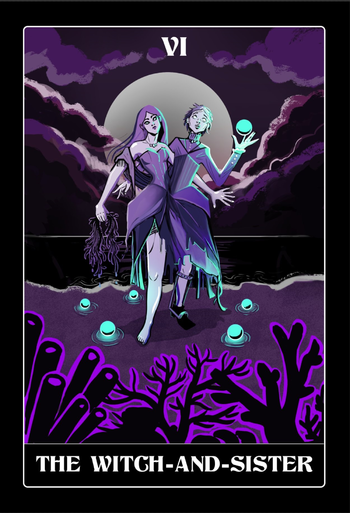 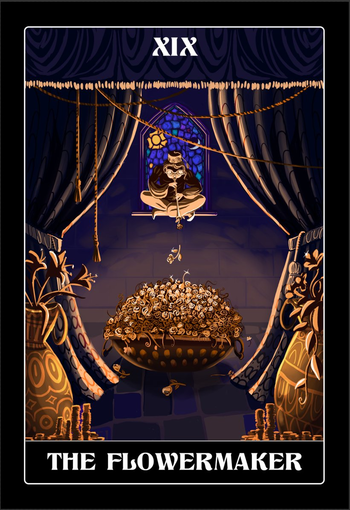 The Forge of Days 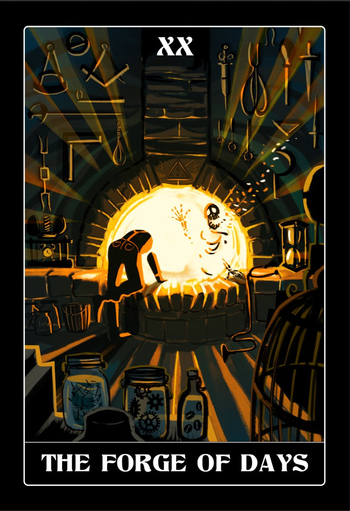 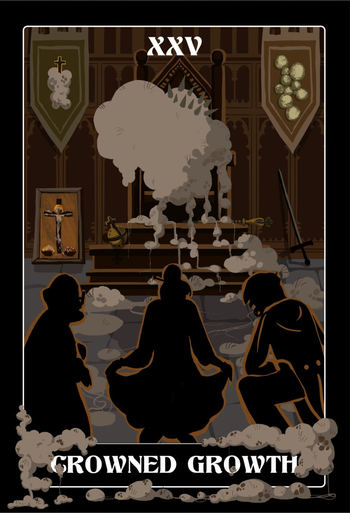 The Sun-in-Splendour
"Noon, the saying goes, is not what it was."
The Mare-in-the-Tree 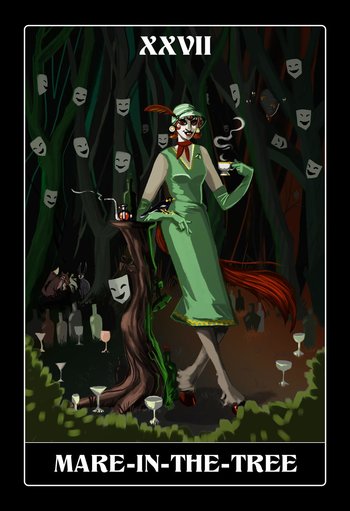 The Baldomerian
Teresa Galmier was once an occultist and apparently Christopher Illopoly's lover, who wrote The Locksmith's Dream series of books that you can study, until she went off a deep end and ends up becoming a Name of the Door In The Eye.
Burgeoning Risen
A corpse that has been reanimated by the ritual implantation of plants, causing it to rise and do your bidding, at least for a time. Far more enduring than the other basic form of undead, the Shattered Risen, since with pruning and maintenance its countdown can be reset.
Caligines
A Mansus spirit that is created when the power of the Forge burns away less pure elements. Can be used to attack enemies in their dreams.
Ezeem, the Second Thirstly
A god of change and desire emanating from the Red Grail.
Hints
Frail wisps formed from those who have died and entered the Mansus, Hints live in mirrors to avoid the direct gazes of mortals. When they do leave their glassy homes, they prove to be vicious and subtle killers despite this weakness.
King Crucible
A Name emanating from the Forge of Days. King Crucible is a god of fire, destruction and the desert.
Maids In The Mirror
A dead person who rested in front of a cracked mirror, who has entered the Mansus through the Peacock Door and came into the service of the Sun-In-Rags. Exceptionally skilled at killing in a quiet, efficient manner.
Percussigants
A Heart Aspected spirit that never, never, never stops dancing. It can learn any dance, but prefers only one.
Raw Prophets
A strange, inchoate spirit that constantly shifts its shape, and doesn't even seem to have a distinct agenda aside from causing chaos. Also called Undergoers.
Shattered Risen
A corpse brought to life by a shattering force. It is close to alive, but slowly disintegrates from the power that animates it.
Voiceless Dead
A dead soul that has crossed through the White Door into the Mansus. They also appear in throngs as obstacles in various expeditions.

Names, Long, and other supernaturals

Mothlike insect people who lived before humanity. Now extinct, though some allegedly survived for some time after the rise of humanity.

The Great Hooded Princes
Miss Naenia
Gentlest of the Elegiast's Names, Miss Naenia plays a small part in the Heart path of the Dancer legacy and a major one in the Ghoul legacy.
Vak
A non-summonable Name. Vak is both a language and a goddess of language. She is also the spirit of the Peacock Door.
The Worms

In Apostle Legacy, you will face enemy Long that will try to stop you from fulfilling your Mentor's goals.

In General
Captain Welland
An old Forge Long who has fought in many wars, in many eras, under many names. He holds "the great secret of betrayal", that made the Lionsmith betrayed the Colonel.
The Diarist
J.C.
Julian Coseley is the author of The Six Letters on Necessity and the owner of books at the Gwaer Inn library. Now he's your enemy.
Lady Tryphon
A 3rd century saint

who ascended as a Grail Long, and seems to have changed gender in the process.