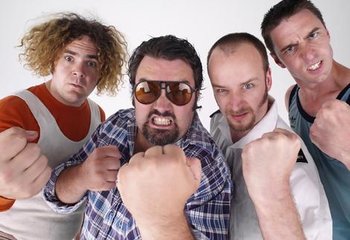 From left to right, Womp, Steve, Mephisto, and Rod.
Make sure you've got a friend with a camera if you're gonna do anything that could get you killed.
Steve Foxx
Advertisement:

Double the Fist is an AFI Award winning Australian TV Series. The show was a self proclaimed mixture of Jackass and The Goodies, combining outrageous stunts with unusual, scripted plots.

More specifically, the show followed the adventures of The Fist Team, a group lead by Steve Foxx on a mission to save the world from the growing epidemic of Weakness. Each episode would see the Fist Team tackle a different problem relating to Weakness, whether it be comfort, education, or being a small child. The team consisted of:

They spread the word of Fistworthiness, a way of life that crushes Weakness and basically make everyone into a Badass Normal. Whenever a character got a achieved something, they would get awarded Full Fist, failure to do so would award No Fist. Episodes would usually end with someone winning a prize of some sort, usually another Full Fist. Series Two introduces Man of Fist, which is awarded to the most outstanding show of Fist Worthiness per episode.

The series was infamously low budget, but managed to get an audience with plentiful special effects and being absolutely bizarre. For example, one episode had a marathon that included such feats as climbing an electric fence, running through traffic, and successfully jumping over a Rift in Time.

After it's initial eight episodes, the series took a break for four years before being revived due to support from fans. The second series had significantly increased special effects and a much bigger budget. However, the ongoing story, while well written, divided fans for almost entirely dropping the show's original format, and turning the Fist Team into outright Villain Protagonists.

Tropers, what a truly fistworthy example of a page. You get...the FULL FIST.