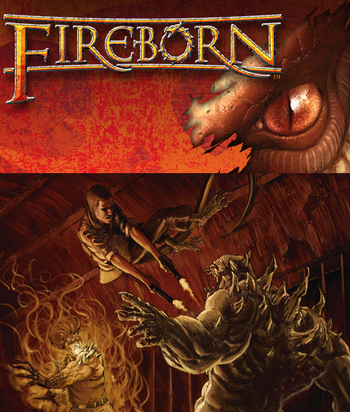 PCs, doing cool stuff.
Fireborn is a 2013 Tabletop Role-Playing Game by Fantasy Flight Games. It is set in the Victorian London that turned into a locus for karma after a powerful ritual took place underground, and this also began to bring magic back into the world, starting from London. This has predictably led to the emergence of monsters, lurking just out of sight; however, it has also created a group of scions, the people who discover through dreams of blood and fire that they possess the soul of an immortal dragon.
Advertisement:

Each player is a scion, and this means that they not only create the background of their character as a human, but they must also claim which of the legendary "sires" their draconic soul is most affiliated with. Since each player begins having just realized who they are, they still need to uncover much of their draconic memories, through seeking out objects that used to belong to the hoards of their dragon selves. Every time they do, the story shifts to a flashback, where you now act as a dragon.

This recollection is also no idle matter, since the aforementioned monsters that are being reawakened by pools of karma beneath London are just as old as the dragons themselves, and were always bitterly opposed to them. Only through understanding their past can they learn how to combat them in the present.

The game can provide examples of the following tropes: