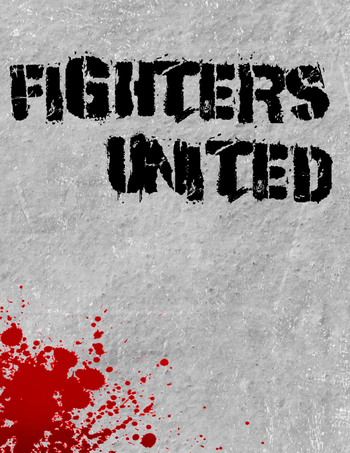 Twenty minutes in the future, the world has changed with the introduction of superpowered individuals called 'Fighters'. These men and women generate powerful energy known as Fu. This grants them Chi, a resource that allows them to use supernatural powers called Tricks. These Tricks are organized into 19 different 'Styles', martial arts that range in specialization from "punching things really hard" to "thinking at things really hard".

Mechanically, Fighters United uses the Dynamic Die System. Characters have five Attributes, each with their own dice, and a number of Skills, each with a static value. To succeed at a challenge, the character rolls their Attribute die and adds the value of their Skill; meeting or beating the challenge number counts as a success. Attributes range from d2 (essentially dead) to d12 (the peak of human conditioning). Supernaturally empowered characters like Fighters can raise their Attribute die well above d12, allowing mid to late game characters to increase in power without limit. A character's average power level is measured by their Fu, which is a value rated from one to ten. As a character advances in the game by spending experience points gained during play, their Fu increases passively.

In the game world, it has been many years since Fighters arose in the world. When they first started to appear, there was a rise of costumed vigilantism during an era called the Sentinel Epidemic. Four-colored heroes and villains battled each other across the world. The Epidemic ended with The Cataclysm, a battle between two Fighters that killed thousands. World governments put harsh sanctions on Fighters, until an international humanitarian organization called Fighters United rose up to, well, unite the Fighters. Now the Union battles against the terrorist organization called Valkyrie, lead by the enigmatic Lady Sin.

The game has been temporarily pulled from sale in preparation for its 2nd Edition.