Literature / The Universe Between 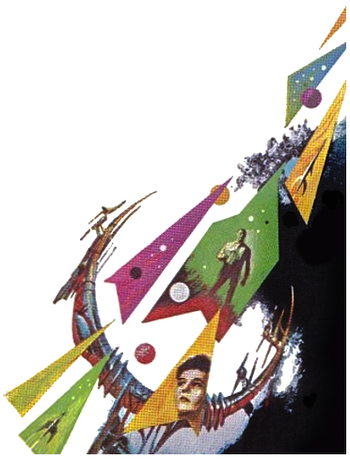 In a world hurtling headlong toward social and economic ruin, scientist Hank Merry finally manages to create a working matter teleportation machine, the transmatter, to be used for the transportation of raw materials from other planets to Earth. Except that the machine isn't finished, and nobody knows how it is actually working. What at first seemed to be mankind's salvation turns out to be its worst nightmare as huge chunks of the Earth and its major cities begin to disappear into nothing without a single trace left behind. Whatever the transmatter machine is doing it is making someone, somewhere, very angry.

Enter Robert Benedict, a young man trained from birth to safely cross the "threshold" and navigate the mysterious "Other Side", a neighboring universe with such bizarre geometry that several of the people who discovered it died from shock after accidentally crossing over. As it turns out, the Other Side is being mangled and torn apart by the objects and air molecules being forced through it by the malfunctioning transmatter, and it falls to Robert to find a way initiate real contact with a people he cannot see, hear, or even properly speak to, before their desperation to find and stop the transmatter forces them to destroy the entire Earth.

Written by science-fiction author Alan E. Nourse and originally released in 1951 as two short stories "High Threshold" and "The Universe Between", the story explores themes of communication between people of radically different cultures and backgrounds, the unknown complexities of the universe, resource depletion and conservation, overpopulation, and how humanity can never truly know all there is about the nature of reality.

The Universe Between contains examples of: