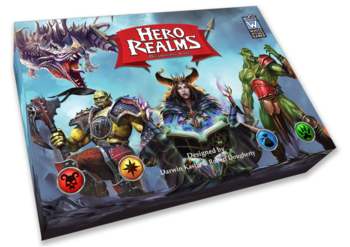 Just a few of the Champions that will aid your Heroes...
While Thandar's trade has delivered its promised peace to nations, the wealth generated by its trade spurs endless political and physical conflict...
Advertisement:

Hero Realms is a Fantasy Turn-Based Combat Deck Building Game designed by Darwin Kastle and Robert Dougherty. It was published by White Wizard Games in 2016. Set in the city of Thandar, the players are characters attempting to reduce their foe's Health to zero. To do that, they need Gold to buy new actions and allies, in order to increase their Combat points.

Based on the Star Realms engine, the two games have similar gameplay: Players start with a standard low-power deck, play five cards, buy from a common market, attack, discard, and draw new cards. But whereas Star Realms has a strategic space war theme, Hero Realms is more akin to a Fantasy Roleplaying Game- each person is a Player Character. Instead of leading fleets and bases, the hero has Actions, personal weapons, and Champions working for them. As part of this new thematic focus, the game also offers Character and Boss Decks that offer specific classes with their own unique items and powers.

The players can buy new actions and Champions from four factions:

In addition to the base game, Campaign Decks add more of a Roleplaying Game aspect, allowing players to develop their personal deck during those sessions. Hero Realms The Ruin Of Thandar is one of these Campaigns, released in late 2017.