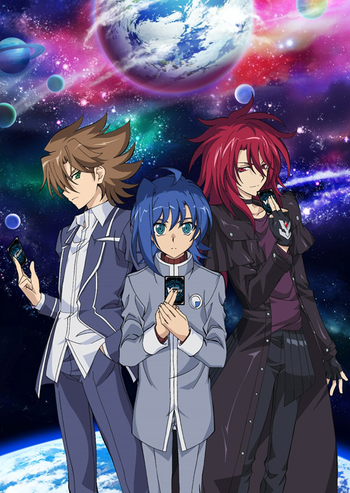 Let it shine! Be Legendary!
Aichi: "Vanguard! It's a card game where you can become a leader and fight your way to victory!"
Kai: "Imagine it! Imagination becomes your strength!"
— Opening Narration at the beginning of episodes 3-27.
Advertisement:

The reboot of the original Cardfight!! Vanguard series.

Cardfight!! Vanguard (V series) began airing in May 5th, 2018. The first three arcs which follow Aichi's journey once more were based on the manga made by Akira Ito, but spun around its own story when its material ran out. Also unlike the previous series, the V series goes through various time periods and even other worlds.

A video game based on the reboot called Cardfight!! Vanguard EX and developed by FuRyu has been announced for the PlayStation 4 and Nintendo Switch and is set to be released on September 19 of 2019. It will feature its own storyline as well a brand new protagonist named Izuru Shidou and other game-exclusive characters.

While the series concluded on November 28th 2020 and was succeeded by overDress on April 3rd 2021. The V series received a new spin-off anime called mini vanguard Large on July 6th 2021, which is a omake-style anime which features Selka assembling the four protagonist (Aichi, Shinemon, Emi and Chrono) in order to make the planet Aniversario and enjoyable place for everyone.