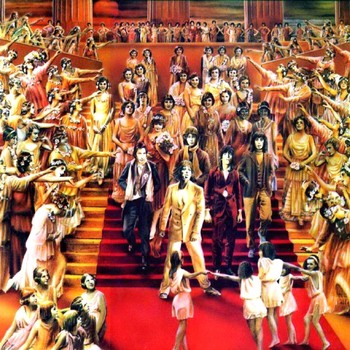 It's only rock 'n' roll, but we like it!
Advertisement:

It's Only Rock 'N' Roll is the twelfth studio album (fourteenth American album) by The Rolling Stones, released in 1974. It is their last album with Mick Taylor, who quit shortly after release. However, he would latter appear on Tattoo You on archive tracks. His future replacement Ronnie Wood (at the time a member of the Faces) made some contributions to this album, particularly the Title Track (which is now a classic Stones song).

A fan club dedicated to The Rolling Stones

was named after this album.

Till The Next Trope: