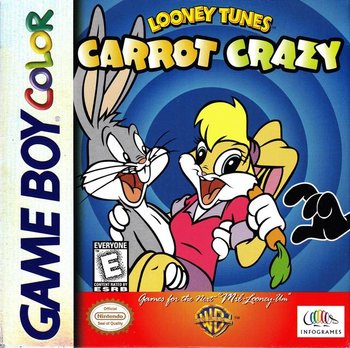 Bugs Bunny and Lola Bunny have a nasty surprise waiting for them when they emerge from their underground homes. Their valuable carrot patch is totally empty! Who could have possibly stolen them? The trail left by the crook leads the duo to a studio, where Bugs' ever eternal archfoes Yosemite Sam, Daffy Duck, Elmer Fudd and others await. Could they have something to do with the missing carrots? Of course they do! It's up to Bugs and Lola to take them down and recover their stolen carrots.

This game is a 2D platformer where you have to run and jump through levels in Bugs and Lola's search for the stolen carrots. The two characters have their own unique abilities well-suited for each situation, and can be switched between them with the Select Button. Knowing which character to use to conquer obstacles and puzzles is required.

Level structure is linear, but in order to complete the level and to tie into the studio theme, players have to find four pieces of a clapperboard to end the level.