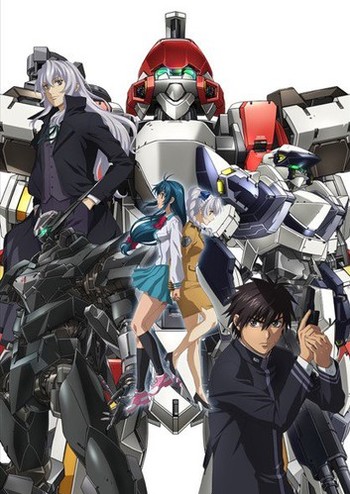 Full Metal Panic! Fight Who Dares Wins (フルメタル・パニック！ 戦うフー・デアーズ・ウィンズ in Japanese) is a turn-based combat Licensed Game based on the Full Metal Panic! series by Bandai Namco Entertainment for the Playstation 4. The game is based on the Invisible Victory anime, though the starting parts is based on the first novels as flashbacks, especially for when Sousuke first meets Kaname as part of his Special Response Team assignment. It's released on May 31, 2018 in the Asia-Pacific in English, Japanese and Traditional Chinese.

The game has a body damage-type system in which using specific types of weapons like machine guns, assault rifles and shotgun can damage a particular Arm Slave's limb to immobilize it and prevent it from moving, although taking out the body is imperative in order to defeat it. In addition, there's an Active Skill system in which players need to acquire Active Skill Points so that a character's skill can be acquired from a skill tree.

The production crew has mentioned that the game will offer hidden endings and alternate tactics that players can use to win in a level such as preventing Nami's death in the hands of Kurama.

The following tropes are found in the game only in addition to those tropes originally found from the light novel series: