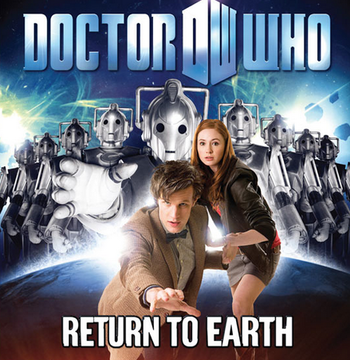 A 2010 Doctor Who video game for the Nintendo Wii, produced by Asylum Entertainment under official licence from The BBC.
Advertisement:

The story goes that Earth in the 26th century has been attacked by vicious solar storms, and all the inhabitants of the planet were evacuated in cryogenic suspension aboard several escape craft that were set to return after the danger has passed. Flash forward to the time of the return, and the SS Lucy Gray is the first ship to make it back to Earth. However, she has been boarded by Daleks and Cybermen, who wish to use it as the first foothold on a takeover of the planet. Enter the TARDIS: it's up to the eleventh Doctor and Amy Pond (controlled by the player) to stop the invasion attempt and see to it that the ship's human occupants make it back to Mother Earth safely.

It is also a Multi-Platform game, being produced alongside the Nintendo DS title Doctor Who: Evacuation Earth.