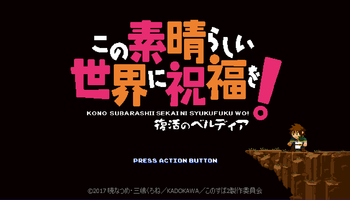 Kono Subarashii Sekai ni Shukufuku o! Fukkatsu no Beldia is a game based on the KonoSuba light novel series.

Taking place between the second and third volumes (or the first and second seasons of the anime), the events of the game start when Aqua, Megumin, and Darkness, who are on their way to the guild, are brainwashed by Verdia, who has inexplicably come Back from the Dead. Kazuma, running late from doing chores that Aqua forced him to do, arrives just in time to see his party members being taken away by Verdia. Kazuma decides to wait until they starve, until he finds out that they've been causing havoc in the countryside. Now facing an even larger debt than before, Kazuma sets out to save his teammates.

Fukkatsu no Beldia is a love letter to 8-bit and 16-bit platformers, the Mega Man (Classic) and X games in particular, along with some RPG elements. Kazuma can slash and shoot his way through enemies, as well as use magic skills on them. Guild quests can be taken on during levels, and completing them will grant Eris, which Kazuma can use to buy magic skills and items.

The game was packaged with the first Blu-Ray and DVD volume of the anime.

Fukkatsu no Beldia provides examples of these tropes: