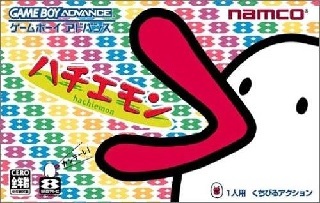 Hachiemon is a 2003 Japan-exclusive Platform Game developed by Natsume and published by Namco for the Game Boy Advance.
Advertisement:

The titular egg-shaped character who's the mascot for Kansai TV

is on a quest to collect detachable lips around Japan after a herd of cows had theirs stolen. To get around, he must use his bill-like lips to grapple on surfaces and smack foes.

This game smooches the following tropes: