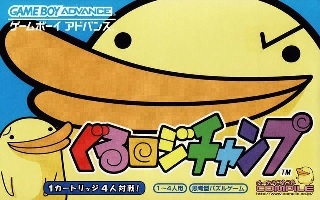 Guru Logi Champ is a 2001 Puzzle Game released by Compile for the Game Boy Advance. It is the third and final game in their trilogy of Champ games, the previous two being Bucket Relay Champ and Quiz Tsunahiki Champ, which were released on the company’s Disc Station disk magazine. The game features the titular Champs, a race of duck-like creatures, whose daily life is threatened by the Boss, a large demonic Champ who desires to cause anything and everything that spins to malfunction. However, his reign of terror won’t go unopposed—a duo of heroic Champ brothers show up, and plan to set right what the Boss has set wrong.
Advertisement:

The gameplay is a variant of Sokoban. The player must shoot blocks from the bottom of the screen and set them thoughtfully along the board's obstacles until all the target spaces are filled. The board can be rotated and gimmicks such as holes, rubber and pushable blocks are introduced later on to spice things up.

The game is said to have never seen a release in America due to internal troubles with localization, but its 2010 DSiWare sequel called Guruguru Logic did get localized as Snapdots.