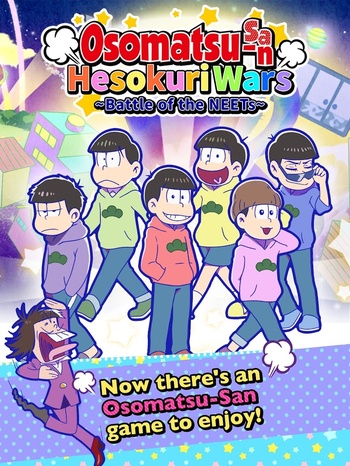 Osomatsu-san plus Tower Defense gives you this quirky game.

Created by avex pictures, Osomatsu-san Hesokuri Wars: Battle of the NEETs (おそ松さんのへそくりウォーズ～ニートの攻防～) was first released in Japan in 2016, and was released in North America in September 2017.

The main gameplay is quite straightforward. You can carry up to 10 different types of Matsus with you. Your AP builds up over time, and when you have enough, you can send out a Matsu, which walks towards the enemy base and tries to knock it down. It then needs to recharge before it can be sent out again. Most battles, as is per the norm for this kind of Tower Defence, quickly devolve into whose Zerg Rush is stronger.