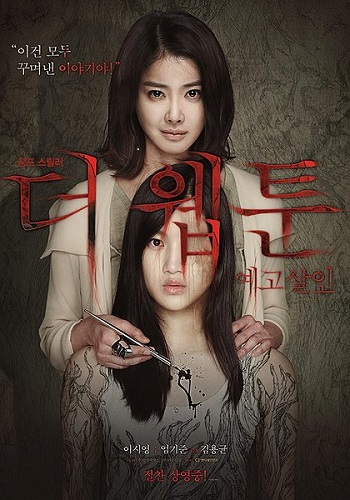 Killer Toon ( 더 웹툰: 예고살인) is NOT about a cartoon character that goes on a killing spree, but, in fact, a 2012 horror movie from South Korea. Protagonist Kang Ji-yun is a writer of Manhwa (Korean comic books) in the horror genre. She emails her latest completed work, The Black Veil, to her publisher, Seo Mi-suk. Seo receives the email and discovers to her terror that the comic is about the suicide of Seo's own mother, who wore a black veil due to ghastly facial injuries. And even worse, the comic is depicting what is happening to Seo in her office as she reads it. Both the comic book and Seo's own life end in a violent death in the office. The police write Seo's death off as a suicide, but lead investigator Lee Gi-cheol doesn't agree, although his cheerful junior partner Kim Yeong-su does.

When a second victim, Jo Seon-ki, receives a copy of Ji-yun's comic that depicts his own death, followed by his violent death as well, Ji-yun suddenly becomes a murder suspect. She is thus forced to divulge an embarrassing secret: she is a plagiarist. She suffered from severe writer's block after her debut comic book A History of Lunacy, until an anonymous email arrived in her inbox, with a new comic, which Ji-yun in desperation copied and published as her own. All of her work since then has been copied from the same anonymous source. Police trace the emails to an abandoned apartment building where Ji-yun used to live with her friend Seo-hyun—a disturbed young woman with a compulsion to draw dark, violent art. And Seo-hyun has been missing for years...