The characters of Muv-Luv Alternative.

open/close all folders
Takeru Shirogane
Rank: 2nd Lieutenant
Unit: UN Training Squadron 207b —> UN Special Task Force A-01
Voiced by: Soichiro Hoshi
"I am going to do what only I can do."

After his experiences in Unlimited, Takeru actually starts out as physically fit and competent as he was at the end of basic training, and being commissioned as an officer in the previous world. This leaves his new squadmates in awe rather than their dismissive attitude in Unlimited. 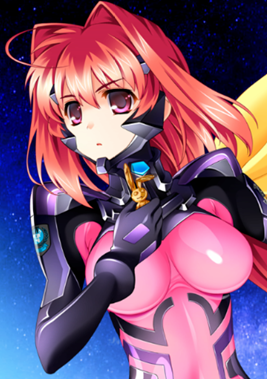 The 00 Unit is an artificial construct created by Yuuko. Being humanity's last, best hope for victory against the BETA, it's construction was the ultimate end goal of Alternative IV. 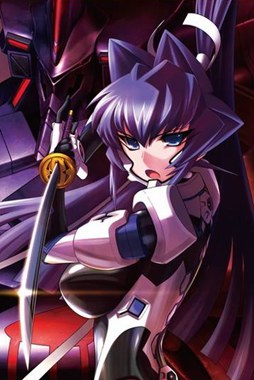 Meiya remains largely unchanged from Unlimited, but due to the differences in Takeru, the two are more prone to arguing than before. While Meiya believes that people's livelihoods and human dignity are just as important as survival, Takeru is somewhat desperate after witnessing the events of Unlimited and sees little point in doing anything other than what it takes to defeat the BETA. She becomes Takeru's closest friend despite this. Unlike Unlimited, her self sacrificing tendencies and attachment to duty are more closely examined and she does her best to value herself more.

While her role is largely unchanged from Unlimited, as the story progresses she eventually makes strides in getting rid of her non-confrontational demeanor and sticking to her opinions more frequently.

While she is the same as ever in Alternative, Ayamine features prominently in the coup d'etat arc due to her connection to a certain army captain named Sagiri. As the story goes on, she puts effort into being more open.

In Unlimited, Mikoto was the token member of the squad with a normal family. However, Alternative reveals that her father is the head of the Imperial intelligence agency. Like the other girls, after a certain event she begins to work on her flaws, which in this case would be her lack of attention to what's going on around her.

While still a celebrity of sorts in Alternative as the daughter of the Prime Minister of Japan, this fact becomes mostly irrelevant. The advancing storyline shows the harm her flaws of perfectionism, by the book behavior and emotional denial can inflict, so she does her best to resolve these issues.

Yuuko Kouzuki
Rank: N/A
Unit: UN Alternative Plan IV
Voiced by: Emi Motoi
"I'd like it if the man who talks about great things like saving humanity didn't freak out over every unpleasant detail. I'm only working with you because we have a common interest. I'm not here to take care of a whiny brat."

Yuuko's role is greatly expanded in Alternative as compared to Unlimited. Determined to prevent Alternative V from taking place, Takeru involves himself closely with her Alternative IV program in the hopes of making it succeed this time. In the process, he learns far more about this world's version of the crazy teacher he knew. Turns out, she's pragmatic to the extent that she horrifies Takeru on occasion.

Marimo Jinguuji
Rank: Major (IJA) —> Sergeant
Unit: IJA Fuji Tactical Fighter Training Group —> UN Alternative Plan IV
Voiced by: Miki Inoue
"When you get to the point where you can laugh at your mistakes, you'll find new things to replace what you lost."

In the world of Unlimited/Alternative Marimo Jinguuji is the drill sergeant and instructor of Training Squadron 207, which Takeru joins early on.

After returning from the world of Unlimited, Takeru vows to himself to get to know Kasumi better so he has more success influencing Alternative IV. In the process, she reminds him even more of Sumika than she did the first time.

Achieve your mission with all your might.
Despair not till your last breath.
Make your death count!

Originally the all-female 9th squadron of the wing-sized (12 squadrons of 9 TSFs each) Special Task Force VF-A01 of the United Nations, Isumi's Valkyries became synonymous with the task force after the latter suffered extreme attrition due to being routinely-deployed on high-risk, high-mortality missions. After graduation, Takeru and the rest of the 207th Training Squadron join the Valkyries.

The squadron took part in the momentous battles at Sadogashima, Yokohama and Kashgar, cumulatively sustaining 100% casualties, with all members killed or severely-wounded in action.

For the non-Valkyrie members (and former members) of VF-A01, please see the Side Characters, Family and Attendants folder.

Second eldest of the Isumi sisters and a heroine in age's debut game Kimi ga ita Kisetsu. Michiru is the commander of the 9th Squadron ("Valkyries") of Special Task Force A-01, becoming the de facto leader of the latter after the 9th remained the sole surviving unit.

Reappearing again after a small role in Extra, in Alternative, Kashiwagi is revealed to be one of the mid-range combat specialists of U.N. Special Task Force A-01. She appears to nurse a clinical and detached attitude whenever possible in hopes of completing the mission as successfully as possible.

Originally from Rumbling Hearts, Mitsuki is Haruka's best friend and rival for the affections of a certain guy, and constantly engages in playful rivalry with her. She is the second-in-command of the Valkyries, and as their best front-liner, occuping the elite Storm Vanguard 1 position.

Haruka is the elder Suzumiya sister. Due to an accident during training, she lost her legs. However, thanks to the more advanced medical technology in the world of Alternative she managed to procure prosthetic legs of such high quality that Takeru did not even notice. Unfortunately, the legs do not mesh up perfectly with her and thus while she is completely inconvenienced in her normal life, she cannot pilot a TSF anymore and instead works as Mission Control.

Munakata is one of the senior members of Isumi's Valkyries. Though she tends to enjoy teasing others, especially Hayase and Takeru, she's actually an effective subcommander and fairly insightful.

Kazama is the most senior 2nd Lieutenant in A-01 and a friend of Munakata's. She's quieter than Takeru, but people say she can be pretty scary despite her laid back demeanor.

In the world of Alternative Akane is still quite talented, but her emotions frequently get the better of her on occasion, leading her to not getting the Storm Vanguard position she'd prefer. She's also a huge Hayase fangirl and is initially a little jealous of Takeru's instant recognition and sheer ability, though she warms up quickly enough.

Side characters, family and attendants

Rank: Shogun (IJA Commander-in-Chief)
Unit: N/A
Voiced by: Kozue Yoshizumi
"... You must never hesitate to stain your own hands with blood. People who show others the way must never avert their eyes from the weight of responsibility."

The Shogun of the Empire of Japan in Unlimited/Alternative.

The commander of the 16th Battalion of the Japanese Imperial Royal Guard, Ikaruga is the current head of his family, which is one of the five among which the Shogun is chosen (The Koubuin family, from whom the current Shogun hails, is another). Tsukuyomi is a subordinate.

He appears at the Sadogashima Hive battle, arriving with his battalion to stabilize the front line and saving an Imperial Army grunt.

Also appears in Muv-Luv Unlimited: The Day After.

As she was in Unlimited, she is in charge of Yokohama Base's Post Exchange. She brings a motherly touch and an aura of lightness that is the source of several rare happier moments in Alternative.

As he was in Unlimited, he is the commanding officer of the UN's Yokohama Base, the 'home' of Takeru and the cast for most of Alternative. He is also the de-jure head of the Alternative IV Project, with Yuuko Kouzuki as his executive officer and de-facto project leader.

Rank: Captain
Unit: IJA 1st Tactical Armored Regiment
Voiced by: Takehito Koyasu
"If we do not open our eyes now, when will Japan be saved!?"

A captain and commander of the Imperial Army's 1st Tactical Armored Regiment, part of the elite Tokyo garrison.

The ever doting father of Miki, he is also the United Nations Undersecretary-General, like he was in Unlimited. After a small role there, Genjyousai returns for an even smaller role in Alternative. However, this time he is actually more important to the plot as he helps bring in American aid to deal with Sagiri's coup, though Miki is depressed at the thought that her father may have selfishly dragged other nations into the conflict.

Irma is a kind Finnish woman who makes friends with Miki. She reassures her that not everyone in America is completely selfish and that she is in fact a volunteer soldier. She invites Miki to visit her homeland when it is retaken. She does not survive the battle.

Lieutenant Tsukuyomi is the commanding officer of the 19th Independent Guards Flight, a unit within the elite Japanese Imperial Royal Guards. She remains Meiya's loyal confidant and protector, as she was in Extra/Unlimited. While Tsukuyomi starts every bit as suspicious of Takeru as she did in Unlimited, he manages to make a good impression on her unintentionally and she comes to greatly respect him.

Rank: Major
Unit: US 66th TSF Wing
Voiced by: Takashi Maejima
"I have sworn my loyalty to the United States of America! In the name of my proud country... I cannot allow you to pass!"

Walken is an American Army Major who comes to the rescue of Takeru's squad. His emphasis on completing the mission and disregard for the target they are supposed to be protecting is in agreement with Takeru's beliefs, but the way Walken says it irks him in a deep way, causing Takeru to question his own motivations and resolve. Due to his TSF being sabotaged before the battle, he is swiftly killed by Sagiri when hostilities with the rebels begin.

Rank: N/A
Unit: N/A
Voiced by:
"If you really want to know my name that badly... I am a subtly suspicious man."

Sakon is Mikoto's father, an incredibly strange man who is prone to ignoring things that others have just said to him, just like his daughter. Unknown to her, he is the Head of the Japanese Imperial Ministry of Information (the Japanese intelligence agency), jet-setting around the globe and navigating the mess that is the post-BETA political/intelligence world with ease. He seems a little distant from his daughter to Takeru.

Member of UN Special Task Force VF-A01, 7th Squadron "Dellingr", Takayuki is close friends with Mitsuki Hayase and Haruka Suzumiya, and is the man the latter two are competing for the affection of.