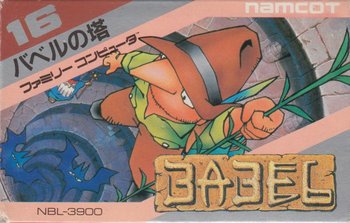 "Welcome to the Tower of Babel..."
Advertisement:

Tower of Babel is a 1986 Famicom puzzle-platforming game by Namco. The game later received ports to the Sharp X68000, Nintendo Gameboy (via Namco Gallery Vol. 3), and most interestingly the PlayStation, on Namco Anthology 1, alongside an enhanced "Arrange" remake version of the game with new levels and graphics among other things.

The plot of the game revolves around Indy Borgnine, an adventurer/archaeologist who has made it his mission to ascend the 64-floor Tower of Babel to discover the Hanging Gardens of Babylon, which are fabled to rest at the top. His quest isn't going to be easy, though—restless spirits, stone golems, among other things, will try to impede his progress.

In order to clear each floor, he must wisely use peculiar L-shaped blocks which have the ability to stack up like staircases and reach the exit. However, he must do so using the least amount of energy he can—if he runs out of energy, he cannot move any more blocks and will faint if he tries. To further complicate his mission, crystal balls are scattered around on some floors, which are required to open the exit. Even more puzzling are large symbols found on every eight floors, seemingly part of some complex password...

This game is notable (in Japan at least) for featuring character designs by Japanese artist Hiroshi Fuji, who worked on several other Namco games, such as The Legend of Valkyrie and Sky Kid. The game received a short-lived webcomic based off of it from ShiftyLook, involving Indy's granddaughter Minnesota being chosen to investigate the tower's decay before its collapse destroys the town surrounding it. Indy also had a prominent role in Episode 8 of the Mappy web series, where he was hired by Goro as a treasure hunter in search of a valuable artifact under Nyamco Headquarters. More recently, the game appeared as a useable theme for Pac-Man 99 as free DLC, changing Pac-Man to Indy and the ghosts to Urs and bats.

Tower of Babel contains examples of: