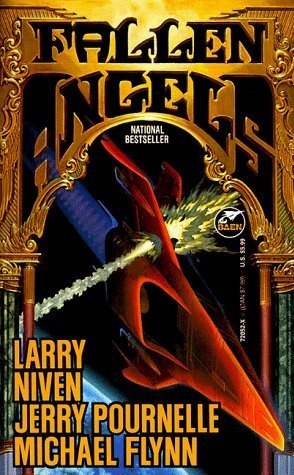 Look out your window I can see his light
If we can sparkle he may land tonight
Don't tell your poppa or he'll get us locked up in fright
Advertisement:

First published in 1991 by Larry Niven, Jerry Pournelle, and Michael Flynn, Fallen Angels takes place on (and above) an Earth that is in the grip of an new ice age as a result of mankind's attempts to curtail runaway global warming. Technophobic governments have been voted into power to save the environment from the evils of pollution, technology, and free-thinking. Glaciers are expanding every year, with huge sheets of ice reaching down past the U.S.-Canadian border. Resources are scarce, tensions are high, and knowing or caring too much about science can land anyone in serious trouble.

...not that any of those things matter to Space Hab astronaut Alex MacLeod or his co-pilot Gordon Tanner. As members of a colony that lives on orbital platforms circling the Earth, they're totally free from the oversight of the Luddites "downstairs." They've got their own concerns: namely, making a successful scoop-dive of Earth's upper atmosphere to collect much needed oxygen and nitrogen for their colony. But that changes when their ship is shot down. Crash-landing on the North Dakota Glacier, the astronauts instantly become the object of a massive manhunt on the part of the United States Government, which has declared the spacemen to be "illegal aliens." Injured by the crash and paralyzed by Earth's gravity, Alex and Gordon are sitting ducks — unless they can be rescued by the only allies their space colony has dirtside.

Stuck on Earth's surface, Sherrine Hartley was once a fan of science fiction. That is, until it became too dangerous to say that sort of thing in a climate of raging censorship and rampant distrust of sciences. If people knew she attended sci-fi conventions and read speculative fiction, she could lose her job or even be sent to a "reeducation" center. So Sherrine left the fandom behind, kept her head down, tried to live the mundane life — until her ex-boyfriend Bob Needleton called at 3 in the morning with a proposition to rescue the "Fallen Angels."

Sherrine joins Bob and a cadre of friends from the underground sci-fi fandom she thought she'd never see again on a quest to save the downed Angels and get them back to the Space Hab. But their mission won't be as simple as digging the astronauts out of the ice. They'll have to find a rocket to get take the spacers back into orbit; no easy feat in a country that shuttered the space program. And the government is hot on their trail, with the chase headed up by the cunning Captain Lee Arteria of the United States Air Force Office of Special Investigations. What follows is a mad dash across the United States and a make-or-break effort to get the Angels off-planet.

The book is largely a satirical nose-thumbing at "anti-science" contingents of the late 80's: namely environmentalists, humanist academics, and politicians who cut the budget for the space program. It's also a tongue-in-cheek love letter to sci-fi fans and fandom culture of the late 80's, teeming with references to classic works of science fiction and big names in the genre. (There's even a web page listing all the cameos and character references

that appear in the book.)