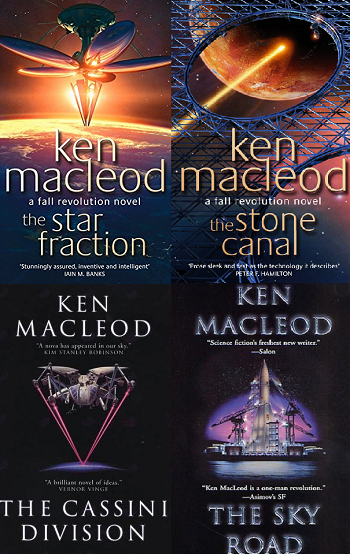 The Fall Revolution series is a "Future History" tetralogy by Scottish Science Fiction writer Ken MacLeod. The series covers a time span of about 400 years, starting with the university days in Glasgow of three key recurring characters through two global political upheavals, nuclear war, the singularity and planetary colonisation. There's a strong political theme of socialism and libertarian anarchism. Both the series as a whole and the individual books exhibit Anachronic Order.
Advertisement:

The first book, The Star Fraction sets the scene, following the events of the Fall Revolution and the re-uniting of a balkanised United Kingdom.

The second book, The Stone Canal begins on New Mars, a colony planned by Posthumans but populated by a ragtag band of the more conventional type when the Posthuman civilisations crashed. It follows the life and times of Jonathon Wilde (who had a brief role in The Star Fraction) from his university days through his rise as a political power in the anarchist free port of Norlonto, his role in the third world war and eventual death and first resurrection as a personality upload and second resurrection as a re-embodied human.

The third book, The Cassini Division takes place after the events of The Stone Canal following the return of Jay-Dub through the wormhole, and is set in a prosperous and thriving communist utopia that has spread across the solar system but still has to deal with the lingering threat of the fallen Posthumans and their remains in Jupiter.

The final book, The Sky Road is set on Earth, in an alternate future from the one which led to The Cassini Division, and is largely set in a peaceful and liberal new civilisation that formed from the Green (ecoterrorist) and Red (communist) "barbarians" after a final nuclear war on Earth destroys all electronics via EMP and everything in orbit via Kessler syndrome. It looks at the history of Myra Godwin from her student days and her actions following the Fall Revolution which ultimately end civilisation and lead to her being granted the title of Deliverer.