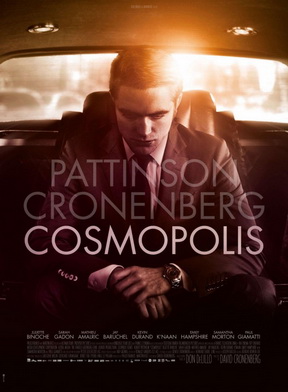 Greed is, in this case...weird.
Erik: Look, I'm trying to make contact in the most ordinary ways. To see and hear, to notice your mood, your clothes. This is important. Are your stockings on straight? I understand this at some level. How people look, what people wear.
Elise: How they smell. Do you mind my saying that? Am I being too wifely? I'll tell you what the problem is. I don't know how to be indifferent. I can't master this, and it makes me susceptible to pain. In other words, it hurts.
Advertisement:
Erik: This is good. We're like people talking. Isn't this how they talk?

Cosmopolis is a 2012 drama film directed by David Cronenberg, based on the 2003 novel of the same name by Don DeLillo.

Hermetically sealed in his high-tech stretch limo, financial whiz-kid/gazillionaire Erik Packer (Robert Pattinson) is intent on three things: making a killing on the financial markets, talking his new high society wife into having sex with him, and—most importantly—getting a haircut from his favorite barber on the other side of town. None of these go as planned: the markets kill his finances, he has sex with every woman but his wife, and a series of traffic jams, riots, and promises to assassinate him slow Erik's commute to an agonising crawl.