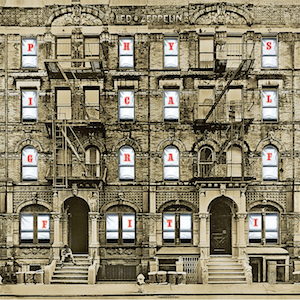 Talk of days for which they sit and wait
All will be revealed
Advertisement:

Physical Graffiti is the sixth studio album by the English rock band Led Zeppelin, released as a double album on 24 February 1975.

The band wrote and recorded eight new songs at Headley Grange. These eight songs stretched the total playing time of the record beyond a single LP's optimal length,note The eight songs from the 1974 sessions ran for some 54 minutes, which still would fit on a single LP if the grooves were spaced closer together, but this in turn requires reducing the average volume of the record and therefore reduces the signal to noise ratio (and thus the sound quality). Moreover, if a record has narrow enough grooves, a worn or damaged needle can even destroy the record. As a result, artists typically avoided including more than about 23 minutes per LP side if they could help it, although much longer single LPs have

. so they made this a double album by including one outtake from Led Zeppelin IIInote "Bron-Yr-Aur", and three each from Led Zeppelin IVnote "Down by the Seaside", "Night Flight", "Boogie with Stu" and Houses of the Holynote "The Rover", "Houses of the Holy", "Black Country Woman", including the unused title track. This resulted in an album that covered even more stylistic ground than their other albums.

As a result, Physical Graffiti was a commercial and critical success (even garnering praise from Rolling Stone, of all places, which had disparaged most of the band's previous works). It has sold nearly ten million copies worldwide and continues to be one of the band's most critically acclaimed works for showcasing the band's mastery of a wide diversity of styles.

In My Time of Troping: