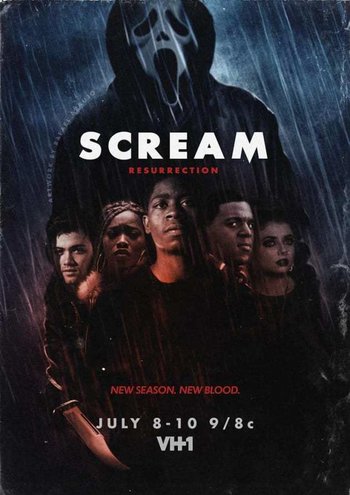 Scream: Resurrection is a 2019 slasher miniseries, based on the films of the same name by Wes Craven, as well as being a retool of the MTV series that aired from 2015 to 2016.

Deion Elliot (RJ Cyler) is the star running back of his high school's football team in the midst of planning for his future, when his tragic past unexpectedly comes back to haunt him, putting himself and those around him in danger. Also appearing in the series are Mary J. Blige as Deion's mother, Tyga as Deion's step-brother, Keke Palmer, Tyler Posey, CJ Wallace (Monsters and Men) and Jessica Sula (Skins), while Roger L. Jackson returns to the Scream franchise as the voice of Ghostface, whose classic mark also makes a comeback after being absent from the MTV series due to copyright restrictions. Queen Latifah serves as an executive producer, while the late Cravennote an executive producer on the first season of the MTV series, who died while it was airing receives a posthumous credit here.

Scream: Resurrection aired all six of its episodes over three nights on VH1 (moving from its original home on MTV) in July 2019.

Has a budding character page.