Podcast / The Smartest Man In The World 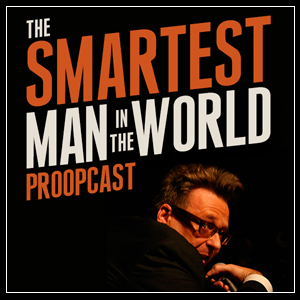 Comedian and actor Greg Proops, of Whose Line Is It Anyway? fame, has been putting out an episode of his podcast about once a week since October 2010. It's been recorded at venues in a number of different countries, mainly the USA, and involves a large amount of audience participation. The show also comprises rambling comedic monologues, lefty liberal ranting about the state of the world (what Proops calls the 'boring preachy part'), and a lot of stuff about baseball.

The title is apparently a reference to the podcast's origins as a space for Proops to simply let rip as if he really were right about everything. However, although the content is often highly political and stridently opinionated, he regularly reads out correspondence correcting or challenging his statements.

For some time, occasional episodes were recorded in the style of a film club, with Proops providing background information on a film before screening it for his live audience and discussing it with them afterwards. This is now a separate release all of its own so as not to interrupt the regular podcast schedule.