Video Game / Around the World in 80 Days 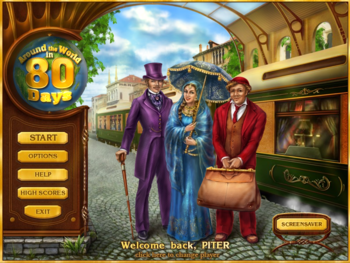 Around the World in 80 Days is a game released in 2008 for computers running Microsoft Windows, Nintendo DS, and mobile devices based on the novel of the same name. In it, you play as Phileas Fogg who has to travel the world in 80 days. Joined by his servant Passepartout, he also has to pick up a stamp in each of the seven countries he visits as proof. The game follows the plot of the book with some minor alterations.

This is a Match-Three Game in which you have to drop pieces of an item to the bottom of the game board to beat the level. You have a power-up that goes through the following stages: hammer (breaks one tile), Tesla hammer (breaks all tiles of a certain type), Bomb (breaks ten tiles in a rhombus-like radius), and fireball (breaks nine tiles in a square radius in addition to annihilating tiles in eight directions). You have to beat each stage before the in-game day is over. There are also levels in which you have to break all tiles on the board to get a stamp to cap off each country, as well as a story that's told through in-game cutscenes and Fogg's journal.