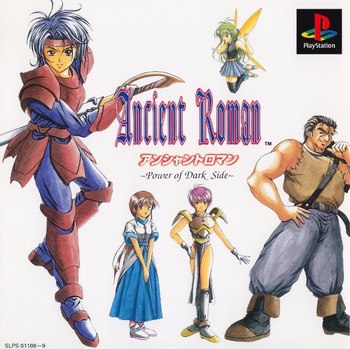 The main thing "ancient" about the game is its 3D graphics
Advertisement:

Released on April 23, 1998 by Nihon Systems in Japan only, Ancient Roman: Power of Dark Side is a seemingly-standard turn-based RPG in a fantasy setting. However, the thing that best sets it apart from the others is its poor production values, particularly its sound and remarkably-well-aged 3D graphics.

The game revolves around The Hero, Kai Orfeasnote (カイ・オルフェアス Kai Orufeasu), who was kidnapped out of his mother's hands as a child by a monster. He is sent to work in the mines until he works his way to freedom at 17. With the help of his friends Michelia Almeyernote (ミシリア・アルマイヤー Mishiria Arumaiyā) and Burke Schwartz note (バーク・シュワルツ Bāku Shuwarutsu), he finally wants to explore the world outside of the town he has worked his entire life in, to discover his true origins. Shortly after, he finds the ruins of a fortress and a town, and he discovers that a virus is turning the world's inhabitants into monsters. Other playable characters in this journey include:

This game examples of: