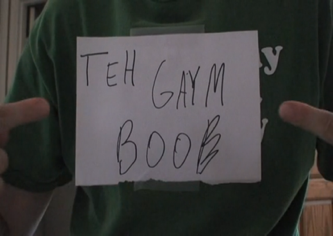 Much of the humor of this show revolves around Critical Research Failure Played for Laughs, vulgar toilet humor, the acting of David Savage himself (who plays the Game Boob with very ridiculous and derpy mannerisms, expressions, and voice), contradictory imagery (that "gun"/"screwdriver" he says you get in Donkey Kong? ... yeah...), and overall failure so epic that it would make Irate Gamer himself blush.

The episodes used to be uploaded on David Savage's initial YouTube channel, TheGameBOOBshow

, but he has since deleted the episodes from that channel and declared it dead. Fortunately, Savage has uploaded some of the episodes (albeit at a very slow rate) back to YouTube on his current channel, TheSavageExperience

In Real Life, David Savage is friends with Emer Prevost of Reaction & Review, and has even requested a movie for that series once.

Just one of those days,
when you don't wanna wake up!
Everything is fucked!
Everybody sucks!
You don't really know why,
but you wanna justify,
rippin' someone's head off!